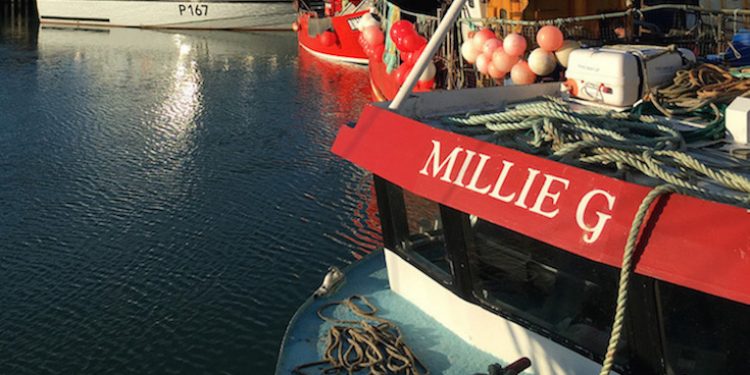 The smallest fishing vessel so far to install a Notus system is an under-10m trawler fishing from Padstow in the south-west of England.

The 9.80 meter trawler Millie-G FH-21 is owned and operated by Paul Blewett of Camel Fish in Padstow, and it has been fitted with a Notus Trawlmaster system supplied by Seafield Navigation, the Scottish distributor for Canadian company Notus.

‘The challenge with boats this size has been maintaining the balance in these small doors. Larger heavy sensors upset the door behaviour by adding drag and toppling the doors,’ said Fran West, owner of Seafield Navigation, commenting that Notus sensors weigh just 1kg in water which means that they do not add extra drag or unnecessary weight to the doors.

Millie-G uses 4’ 6”Dunbar doors on a light single bottom trawl, and midwater doors/trawl for seasonal pelagic fishing. Working in water as shallow as 5 or 6 fathoms with wire lengths out to 175 fathoms meant an innovative approach was needed.

The addition of headline height and footrope sensors provide net opening, distance to the bottom and footgear clearance.

‘The catch sensor allows early detection of a good catch or an early warning of a bag of jellyfish which prove very difficult to handle on boats of this size,’ he said.

‘Notus’s past experience with high length/depth scope ratios proved invaluable in getting the hydrophone installation right the first time.

After initial shakedown trials, the rapid five-second updates from the Notus system removed the guesswork from the job. The headline height was found to agree with the netmaker’s design and the doorspreads are responsive to the changing water depths and bottom conditions including snag detection.’