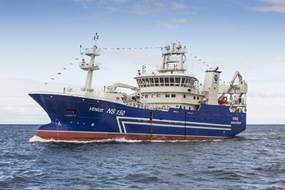 HB Grandi’s pelagic trawler Venus is due to dock at the north-east Iceland port of Vopnafjörður today with 2750 tonnes of blue whiting on board, the result of a week fishing south of the Faroe Islands where bad weather and the difficult conditions it brings made it a hard week’s fishing.

‘We had some decent catches in the first two days and then the weather worsened. A day after the storm died away we started seeing good fishing again, and then we had another storm. We shifted further east during the worst of the weather, but lost the best fishing. Now we’re back where we were due south of the Faroes,’ reported skipper Gudlaugur Jónsson half-way through the trip when they had 1600 tonnes of blue whiting in the tanks.

Then fishing picked up before the weekend until the last haul of the trip was taken on Friday night with 400 tonnes for a 12-hour tow.

‘We started steaming yesterday with 2750 tonnes on board. We’re west of the Faroes and should be at Vopnafjördur around 1400 tomorrow, said second mate Hilmar Kárason on Sunday afternoon.

First blue whiting of the year