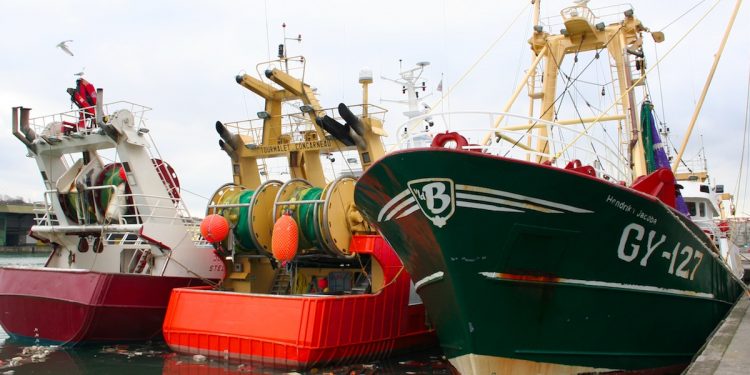 Too big and too many

Boulogne trawler skipper Olivier Leprêtre has sounded a warning over the continuing fishing activity of the Dutch-owned seine netting fleet operating in the Eastern Channel and southern North Sea.

‘They are too many and too big,’ said Olivier Leprêtre, who serves on France’s CNPMEM National Fishermen’s Committee and as president of the Hauts-de-France Regional Committee.

He commented that this fleet has continued to grow in recent years, expanding onto the UK, Belgian and French registries as Dutch operators flag their vessels to other countries.
He commented that the Dutch-owned seine net fleet is currently more than 30 vessels, of which 15 are under the Dutch flag. Twelve are UK-flagged.

‘I do not understand why, in the context of Brexit, the UK allows the Dutch fishing operators to do this,’ he said, adding that his warning is also directed at English fishermen across the Channel, as there is real concern at over-exploitation of fishing grounds in this narrow stretch of water.

‘I don’t understand why the UK allows its waters to be invaded by this destructive fleet because British and French fishermen have always known how to preserve this common resource for future generations. The Eastern Channel isn’t big enough for this fleet,’ he said, commenting that the seine net fleet’s target species are red mullet, whiting, squid, plaice and gurnards.

‘We are concerned at the impact on stocks. They don’t get time to recover. We can see the effects – in the Channel there has been nothing for the last month and this situation has been getting steadily worse over the last few years.’

He commented that the boats that have gone to fish further to the north are the local Boulogne fleet, while the Dutch seine netters have remained in the eastern Channel.

‘They fish right down to the last kilo of fish and they seem to have no concern for the preservation of stocks, as the seine netters get bigger and bigger,’ he said, commenting that a method of fishing as efficient as seine netting needs to be regulated.

‘Any kind of technology needs regulation as it becomes bigger, otherwise there will be consequences. This is the same as pulse fishing – too big and too efficient.’

He added that some years ago the National Fishermen’s Committee recommended that the mainly non-quota species the seine net fleet fishes should be brought under quota management – but no action was taken on this. At the same time, the French organisations have made efforts to regulate this fishery, without success, even though there is a dialogue with the Dutch fishermen’s associations on this.

‘This needs regulation, or there will be even bigger problems,’ Olivier Leprêtre said. ‘This was the aim of the working group – but unfortunately this has bene unsuccessful.’