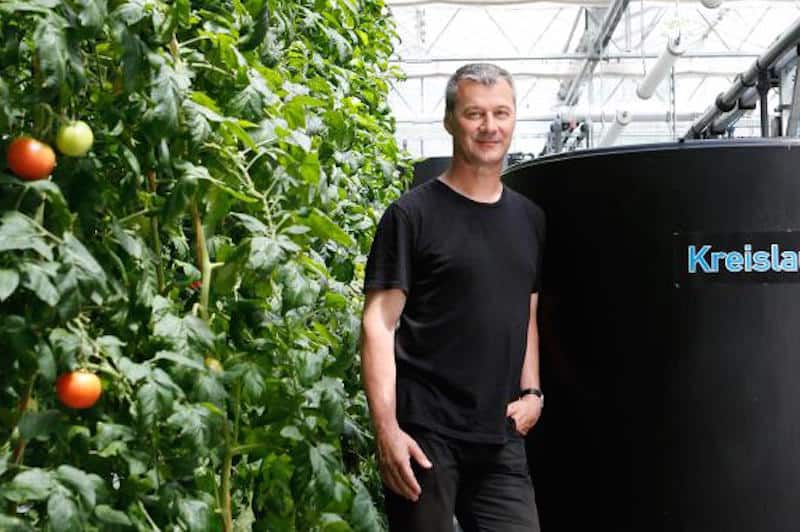 The Leibniz Institute of Freshwater Ecology and Inland Fisheries has developed an innovative method for producing tilapia and tomatoes that saves resources and is almost emission free. Tomatofish could be significant for the future of sustainable rural and urban farms.

According to project co-ordinator Professor Werner Kloas, in 2007 there were a lot of biologists and fisheries people working at the Leibnitz Institute, and one former assistants mentioned that some twenty years before, in the former East Germany, he had been working in aquaponics for carp and cucumbers. That project had been a new approach connecting two systems, one for fish and one for hydroponics of plants, via a one-way-valve that transferred the carp water to the cucumbers in hydroponics.

‘This was the first time I’d heard about the idea of double recirculation for aquaponics. Aquaponics usually means a single recirculation system with water going from fish to plants and to fish again, which usually carries disadvantages: for example, fish and plants have different pH requirements, and nitrate levels in a single circulation system are too low to grow anything other than salads and herbs,’ he said.

‘The advantage of a double recirculation system is that you can manage both parts separately in order to get optimum productivity. So that day we were so intrigued by the implications and gains – water being a precious resource for example – that we kept talking about it for the next three hours.’

The decision was taken not to go with carp, a bony fish for which there is no large market, and instead to focus on fast-growing tilapia. Tomatoes were chosen as they are more challenging than cucumbers in that they need more nutrients. The thinking is that if the system works with tomatoes, it will work with salad, vegetables, herbs and other hydroponic plants.

‘A few months later we applied for a grant for Tomatofish and got the funding,’ Werner Kloas said.

He explained that the system consists of a closed recirculation system for the fish with optimum food conversion ratios.

‘Then in the hydroponic part there is a reservoir of fish water, which has to be optimised for pH and supplemented with some nutrients. Other than that, there isn’t much manipulation because most of the nutrients are already in the fish water. This overcomes the shortcomings of a single circulatory system. We also regain evaporated water from the air conditioning system as well as collect rainwater. At a later stage we might even be able to use some of the water left over by our system instead of using freshwater from other sources.’

‘I’d say you could produce any type of fish or other aquatic animals, except that shrimps for example don’t give a lot of yield in volume: one cubic metre of water could produce 10-20kg of shrimps at the most, while you can get 50 to 200kg of fish. Using algae in place of hydroponic plants could open the way to farming marine water fish. The system cannot be applied to raising chickens, pigs or cattle because of the kind of waste these animals produce,’ he said.

Werner Kloas said that this can both work in households with units that cost under €1000, and can be up scaled to obtain food security in really big systems.

‘The smallest viable production site would be about 5000 square metres and several such sites linked together in one big greenhouse would be commercially viable. There are already a lot of greenhouses in places like the Netherlands and all they need to do is add aquaculture,’ he said.

‘We are now in the process of installing two of those smaller systems in a local school in Berlin and the school will be connected to #FarmedintheEU. The biology and chemistry teachers are very excited about this and they are doing some experimental aquaponics in the school with different plants and even different species of fish. We can help where needed, and we may even benefit from the data they produce on running small systems. I am enthusiastic, the school is enthusiastic and hopefully the kids will have fun. It’s a very good way to disseminate ideas and opportunities,’ Werner Kloas said.

Too much red tapism for fishermen