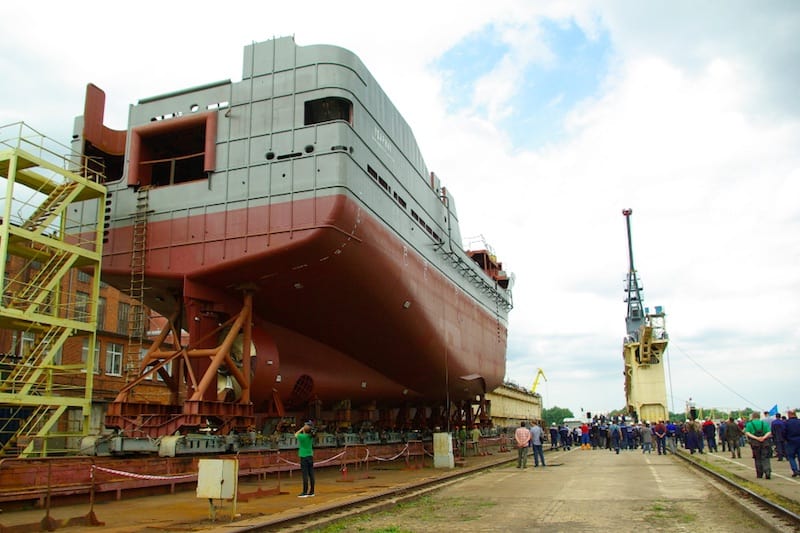 The Yantar Shipyard in Kaliningrad has launched the third pelagic vessel in a series of three being constructed for the Lenin Fishing Collective Farm in the Russian Far East. The trio are being built to an SK-3101R design by Norwegian company Skipskompetanse.

Udarnik was launched at a ceremony last week at the Yantar yard, attended by the yard’s staff and representatives of the designer, the customer and local authorities. The new pelagic vessel was formally launched by godmother Irina Koshel, a former member of the collective farm’s staff and wife of the superintendent overseeing construction, with a champagne bottle smashed against Udarnik’s hull.

‘Today we see three fishing vessels at the yard’s quayside,’ said Yantar general manager Eduard Efimov. ‘I would like to assure our customer that these will be completed on time and will be fine ships. I hope our co-operation will continue and that we will soon launch more vessels for Kamchatka.’

The Collective Farm’s deputy chairman Sergey Yevtushenko congratulated the yard on what it has achieved since the contracts were signed in 2016, commenting that the arrival of the new vessels is eagerly awaited as this will allow the Collective Farm to progress to its next stage of development.

The SR-3101R pelagic vessel design has been developed by Norwegian naval architect Skipskompetanse, and the three pelagic vessels measure 50.60 metres, with a 12 metre beam and each will have a 2200kW main engine. The vessels have been designed so they can alternate demersal and pelagic trawling, as well as seine netting and purse seining. A key feature of the trio is that they will have capacity to store catches in RSW tanks.

The first vessel, Leninets, was launched in November and the second, Kommandor, was launched in March. All three are to be delivered this and next year. These are the first new fishing vessels to be built in Russia for a domestic operator for approximately twenty years.