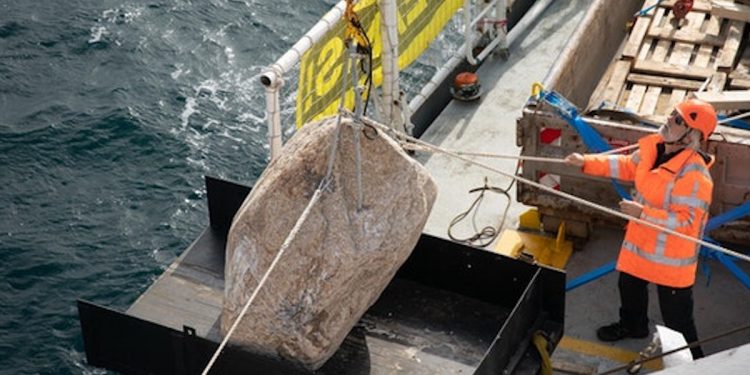 Greenpeace is back to its old tricks once again. A few years ago they tried dropping boulders in the German Bight, and earlier this year they pulled the same stunt in the Baltic off the island of Rügen. Now they’re in the North Sea, heaving boulders over the side to – supposedly – protect vulnerable fishing grounds.

It’s blatantly a publicity stunt – in true Greenpeace style. Once the tweets and headlines are all over, with the mainstream press obligingly presenting solely the NGO’s side of the story, and the publicity pics have been taken, it’ll all be over – until next time.

Maybe it’s time Greenpeace came up with a few fresh ideas..? Dumping boulders is so old-fashioned. But if it keeps the donations coming in, why not?

The whole thing raises plenty of questions. Did Greenpeace obtain a licence to deposit material on the seabed? It doesn’t seem likely – which case this is an illegal act.

Placing objects on the seabed could be seen as conduct likely to cause damage or loss of life, which is a clear offence under the UK’s Merchant Shipping Act.

There have been plenty of accusations from the NGO about trawlers operating without AIS. So is there any real evidence of this? Bear in mind as well that fishing vessels operate with VMS, so position, course, speed, etc, are all logged by the flag state’s authorities. Is there real evidence of an offence being committed here – or is this simply Greenpeace dreaming something up so they have an excuse to pull a stunt?

Then there’s the very real question of what Greenpeace thinks it’s protecting? The North Sea is rammed full of windfarms, with each windmill sited on a steel ring driven deep into the sea floor, plus the myriad cables dug into the seabed. Then there’s the million tonnes of so of prime substrate that the aggregate industry removes annually from the delicate ecosystem of the North Sea and the English Channel, all without a whisper of complaint from Greenpeace or its allies.

Yet, somehow these grounds that have been fished for more than a century and never fail to produce catches desperately need to be protected from a dwindling fleet of relatively small fishing vessels?

There’s something here that doesn’t add up…