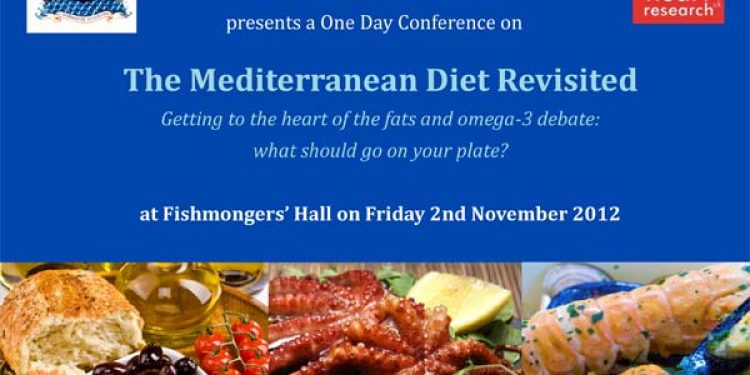 Getting to the heart of the fats and Omega 3 debate: what should go on your plate? Fishmongers’ Hall, London, Friday 2nd November 2012, 0900 -1700
The health benefits of eating seafood and the role of the Mediterranean diet will feature in a conference hosted by the Fishmongers’ Company in association with national charity Heart Research UK this autumn.

The one-day event is being held at Fishmongers’ Hall, London Bridge on 2 November 2012 and will bring together speakers including eminent scientists and food experts from across the world.
The Fishmongers’ Company believes it is timely to take a fresh look at what constitutes the Mediterranean diet with a particular focus on seafood and other sources of Omega-3, including the latest evidence on why it contributes to good health and how it could be adopted more widely and sustainably.

People often feel bombarded and confused with information about diet and health, particularly as some of it is conflicting. There is, however, wide public awareness of the health benefits of a Mediterranean diet, especially in terms of obesity and risk of coronary heart disease.

Keynote speaker Dr Artemis Simopoulos (Center for Genetics, Nutrition and Health, Washington D.C.) will be talking about the Cretan diet and the consumption of fish and shellfish and whether the modern Mediterranean diet has moved away from this model.

‘Although in the past the beneficial effects of the diet were considered to be due to the consumption of olive oil, the most recent studies suggest the contribution of omega-3 fatty acids from fish and vegetables to be even more important.

‘While some people may still debate whether high intake of fish or fish oil is actually protective against coronary heart disease, this is no longer an issue. However, it is not clear whether other components of fish may also have a role in this cardio-protective effect.’
Other speakers will include:

=623; Dr Catherine Féart (University of Bordeaux) who will be addressing fish intake, and cognition.

=623; Dr Katharine Greathead (Heart Research UK) and Professor Julie Lovegrove (University of Reading – Institute for Cardiovascular and Metabolic Research) on the importance of diet for heart health and the role of the Mediterranean diet for healthy heart function and reducing the risk of coronary heart disease.

=623; Kelley Fitzpatrick (Director of Health and Nutrition for the Flax Council of Canada) on whether plant sources of Omega 3 can replace seafood sources.

=623; Dr Alexandra Johnstone (Rowett Institute of Nutrition and Health, University of Aberdeen) on whether the Mediterranean diet can help to satiate rather than stimulate appetite and its importance in reducing the incidence of obesity.

=623; CJ Jackson (Food Writer and Director of the Billingsgate Seafood Training School) will be speaking about what it all means for the consumer and what practical conclusions can be drawn for the fish industry, retailers and consumers.

This is the latest in a series of major conferences organised by the Fishmongers’ Company. Previous conferences have included one on Seafood and Health in 2009 and one on Marine Fisheries Science in October 2011.