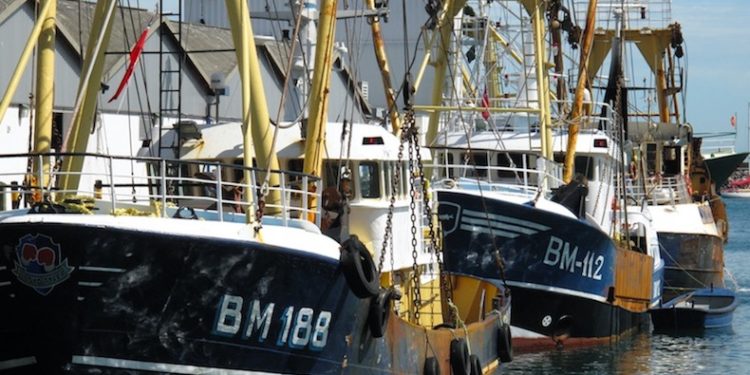 The South Western FPO’s chief executive Jim Portus and Darren Edwards, otherwise known as Edd the Net of Brixham Trawl Makers, are flying to Thailand at the invitation of Dr Adisorn Promthep, Director General of the Thai Department of Fisheries.

‘The visit is an exchange initiative started by the Seafood Task Force that brought Thai fishermen to Brixham in 2015,’ Jim Portus explained.

‘The group that included government representatives came to study the innovations in net technology that Edd and his colleague Al Porter had designed for the Brixham Beam Trawlers as part of the CEFAS Project 50%.’

He commented that discarding of unwanted fish had long been a problem that had blighted the image of trawler fishing.

‘Brixham skippers led by John Hingley, then Mike Sharp and Shaun Gibbs, worked with the local net makers to modify traditional net geometry so that juvenile fish and unwanted benthos can escape on the seabed rather than be lifted to the deck for later disposal over the side.’ Jim Portus added.

‘The results of the 50% Project have been spectacular with a more than 60% reduction in discards among the Brixham beam trawler fleet. The new gear is lighter, tows better, uses less fuel and the better quality catch presented to market has a longer shelf-life for the buyers. The environment, the fish stocks and the market are all winners, so I am not surprised the government of Thailand wants to hear more from us.’

He commented that it appears the Thai fleet is where the British fleet was thirty years ago in terms of gear, and while there are no discards as such, a large proportion of landings is young fish that fetch low prices to become fishmeal instead of being allowed to grow.

‘They’d make more money for fish that have grown big enough for human consumption,’ he said.

‘We will see the boats, the nets and the quay facilities in several ports in Thailand, then we will work with the Government of Thailand and their advisors at Oceanmind to provide some suggestions that may help the Thai fishing industry tackle some of the big issues that presently hamper development potential.’

‘This is a great opportunity for me to show designs and innovations to fishermen who learned to trawl in the 1960s, but whose gear has evidently not changed since then,’ Darren Edwards said.

‘When the Seafood Task Force brought the Thai fishermen to my Brixham net store in 2015, they were fascinated, but it was a whistle-stop tour. I am so pleased that they have invited me and Jim to show us their present fishing methods and gears. It would be great if we can help their fishermen to redesign their nets for better selectivity that in the end will help the baby fish grow bigger and more valuable.’

Jim Portus and Darren Edwards are travelling to Thailand as guests of Charoen Pokphand Foods Public Company Limited (CPF), one of the world’s leading listed agro-industrial and food conglomerates which operates vertically integrated business. The visit is part of the multi-stakeholder Seafood Task Force initiative.

‘This is a great honour for me, Edd and especially for Brixham to be exporting its gear technology and innovations in efforts to improve trawler technology and activities in Thailand,’ Jim Portus said.