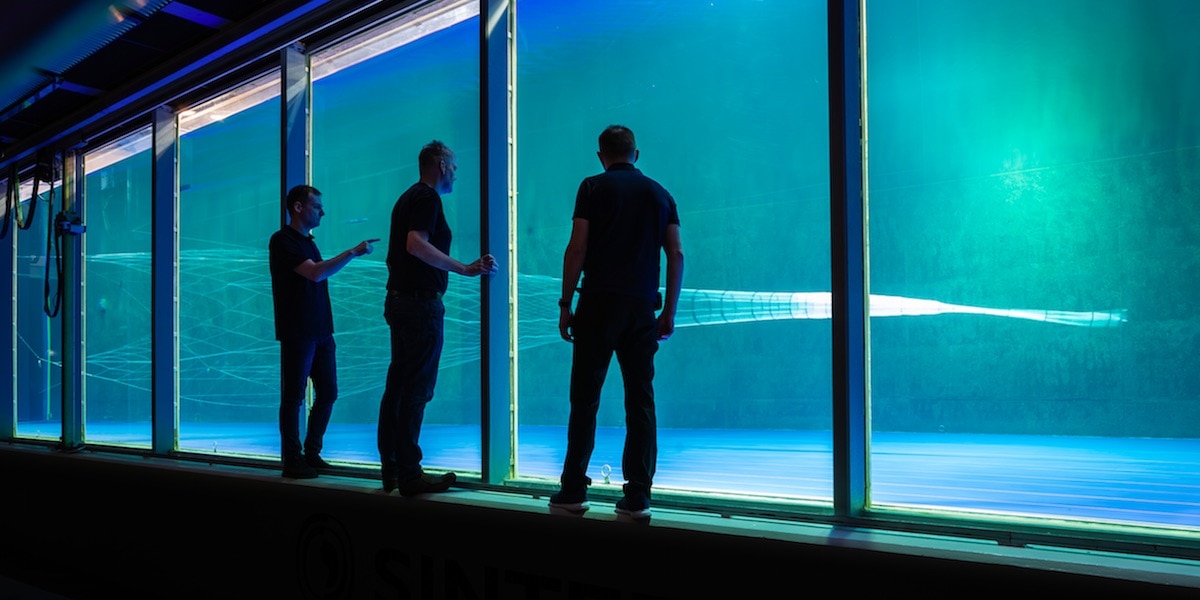 Instead of the usual policy of sending out a small number of selected invitations to one of its flume tank sessions, the Vónin sales team decided to invite everyone.

The trip attracted more than 55 skippers and fleet managers from across Europe to spend time at the tank in Hirtshals.
‘These were from Scotland, Ireland, Norway, Iceland, Greenland, Russia, the Netherlands, Denmark and the Faroes,’ said Jógvan S Jacobsen, Vónin’s sales manager for pelagic gear.
‘There were presentations by Vónin, and also from Lankhorst Euronete focusing on ropes, netting and steel wires, as well as the tank sessions with trawl models.’
This was the first time that the new 2600 blue whiting trawl has been displayed on this side of the Atlantic and this is Vónin’s largest pelagic trawl to date, designed as a step up from the 2304 trawl that has been in use for five years.
‘It’s the same trawl design, scaled up. The 2304 trawl that has already proved itself has 64 metre meshes in the fore section, and the 2600 trawl has 72 metre meshes,’ he said, explaining that this versatile design has been scaled all the way down to a 1200 version, and a number of sizes in between to suit towing power.
‘We have supplied a couple of these 2600 trawls already to Faroese customers, Tróndur í Gøtu and Arctic Voyager,’ he said.

Also demonstrated at the flume tank were new trawl designs for mackerel and herring, starting with the Ultralight mackerel trawl developed for relatively low towing powers and several of these have already been supplied to trawlers in Greenland.
‘The thinking is that this is a trawl for mackerel suitable for trawlers that don’t have that much engine power, but without being too small to be effective,’ he said.
‘The Ultralight 1408 trawl has hex mesh in the forward panels and has been streamlined with the thinnest materials we could use, and the result is that we have seen trawlers of around 4000hp able to tow these trawls at 5.50 knots. Now we’re looking at this as an option for Norwegian trawlers fishing for horse mackerel – with a few modifications.’
The North Sea herring gear Vónin’s designers have developed is a made to sweep the seabed, built using Capto in the upper and side panels, and with heavy DanLine in the lower panel.
‘This is a 1216 trawl, designed to be towed close to the seabed, hence the robust lower panel, and if you snag a few meshes they can be repaired on board,’ he said, adding that as part of the flume tank session, a number of Vónin’s familiar trawls were also demonstrated, along with scaled sets of Tornado trawl doors made to match the models.
‘The 2600 trawl model is made at a scale of 1:80, so this is a smaller scale than most flume tank models,’ he said.
As a result the door models have to be 3D printed and weighted with great precision.
‘These are small enough to fit in the palm of your hand,’ he said.
With a record number of visitors to a flume tank session, the Vónin team were kept busy the whole time – but it was worth it, Jógvan S Jacobsen said.
‘We were pleased to see so many visitors, and this was a very successful trip,’ he said, adding that there will be a return visit to the SNTEF flume tank in Hirtshals coinciding with the DanFish exhibition in October.