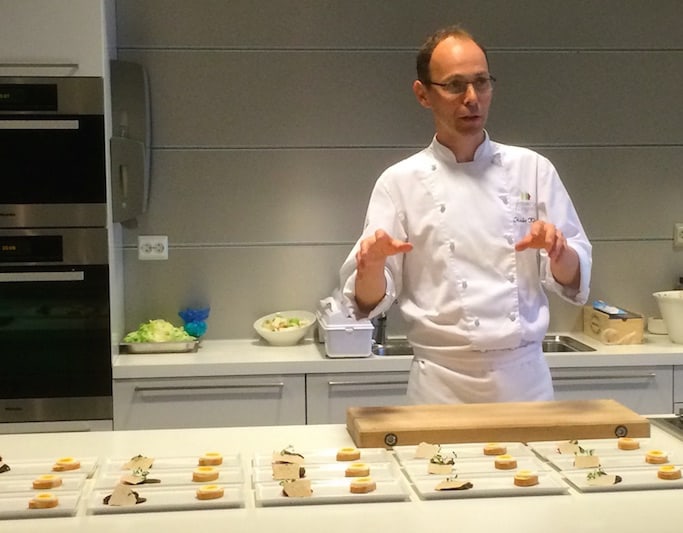 Pharma Marine’s founder Leif Kjetil Gjendemsjø describes what the company has come up with as a new generation of environmentally-friendly and sustainable Omega-3 products that are backed by a tradition going back centuries of producing and using fish oil.

‘Science has shown that we should consume more of the omega-3 fatty acids DHA and EPA in order to maximise long term health and wellbeing,’ he said.

The challenges the company faces in marketing a modern fish oil to consumers lie partly in the traditional taste of cod liver oil that many of us recall from the daily spoonful, and the old-fashioned image. Pharma Marine has managed to lose the flavour and produce some highly refined, blended products that can be part of any chef’s armoury or could be at home in any domestic kitchen.

As Leif Kjetil Gjendemsjø said, this is not cod liver oil. The oil Pharma Marine produces is manufactured from whitefish trimmings. The company takes the production waste from Strand factory trawlers Havbryn and Havstrand, so while the livers are part of the mix, the oil is produced from the fish offcuts as a whole. Pharma Marine has also contracted with the owners of the new Ramoen, due to be delivered this summer by the Armon yard in Spain to its Norwegian owners, to take all of the new trawler’s factory trimmings.

The CodMarine oil has been used, blended with olive oil to produce blends that can replace pure olive oil in cold dishes and salads.

‘It’s an alternative way to cover your need for healthy DHA and EPA,’ said Leif Kjetil Gjendemsjø, who has worked with chef Mindor Klauset of the Ålesund Klippfiskakademiet restaurant to develop dishes that showcase CodMarine oil, and he whipped up a variety of dishes as a demonstration.

Guacamole with cod oil? It works… there’s not a whiff of the old-fashioned cod liver aroma and the guacamole, and so much else that Mindor Klauset made, disappeared rapidly, with no leftovers to clear away.

‘This type of supplement usage in salads and cold dishes is new to me and I was very pleasantly surprised how well it worked. The taste is neutral, opening up numerous possibilities, Mindor Klauset said. ‘If you think it’s challenging to eat enough seafood to cover your omega-3 needs, CodMarine enriches food in a simple and natural way.’

The CodMarine product line from Pharma Marine is the first Norwegian omega-3 concentrate to obtain Marine Stewardship Council certification. By innovating both the production and consumption of omega-3, Leif Kjetil Gjendemsjø hopes to improve people’s quality of life with a mind-set inspired by the rich Norwegian history.

‘CodMarine in many ways reflects a grandmother’s love and care. Our love for wild nature and care for people and resources are important aspects of our company’s philosophy of sustainable production. Like a grandmother, we take pride in utilising 100 % of the fish, so that none of these important resources go to waste.’