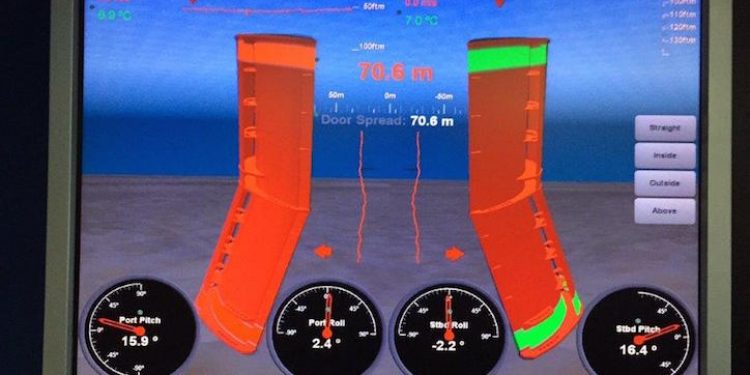 The trials with the Poseidon doors were carried out on board Westmann Islands groundfish trawler Vestmannaey at the end of April with a pair of 4 square metre doors made with arrays of adjustable upper and lower foils that allow the doors to be trimmed identically or individually.

According to Atli Már Jósafatsson at Polar Fishing Gear, the trial doors performed well and skipper Birgir Thór Sverrisson was satisfied with the results as the trawl doors responded to the cable-free remote control system developed by partner company Notus Electronics, who also supplied the array of sensors to measure spread, depth and pitch & roll during the trials on board Vestmannaey.

‘In the first tow we had the doors tilting inward far too much, but we were able to close up the upper foils and open the lower foils to square the doors properly. When the gear was hauled, we adjusted the towing point and after that we only needed minor adjustments with the foils to keep the doors straight up and down as Birgir likes them,’ he said.

‘The doors themselves have been ready for some time,’ he said, adding that the delay has been largely in perfecting the Notus Electronics control system and identifying the right batteries for the job.

When the doors are in commercial production, they are expected to be available with a choice of full control that allows the skipper to adjust the doors while they are in the water and during a tow, or a lower-cost option with a shorter-range wireless link so the doors can be adjusted while they are hung in the gallows.

‘The doors performed as we had hoped they would, and after the initial change to the towing point, Birgir was able to adjust the gear for more or less square, and we could easily tilt the doors outwards by closing the upper foils, which pushes the doors downwards and allowed Birgir to tow with shorter warps. We also saw that in a cross-tide the outer door was sitting higher in the water and we could adjust that door alone so that it dropped back to where it should be,’ he said.

Relieved that the trials on board Vestmannaey had demonstrated that the Poseidon doors performed exactly as he had predicted they would, Atli Már Jósafatsson said the next step is to take the same 4 metre doors for a test trip on a smaller pelagic vessel fishing for mackerel, with a 15 metre pair of Poseidon doors set to be trialled on a larger pelagic vessel later this summer.