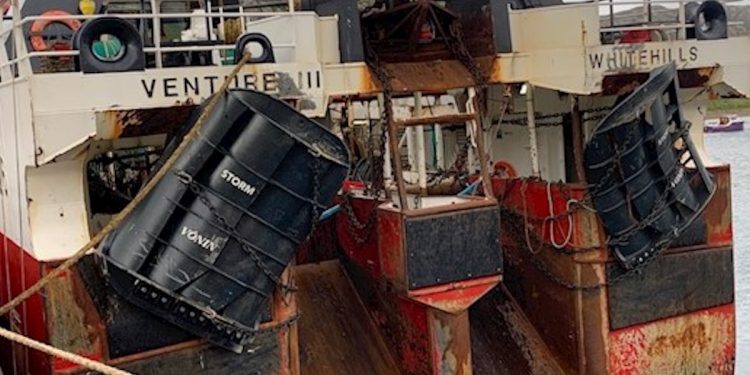 Scottish trawler Venture III BF-326 has been fishing with a pair of 4.50 square metre Storm trawl doors from Vónin, and both of the trawler’s skippers are delighted with the results.

After the first couple of trips with the new doors, skipper and owner Mark Lovie reported back that the Storm doors have performed well on both shallow and deep water grounds, and with both single and twin-rig gear.

‘The spread has been very good, 10-15% more than our other doors, and they have been stable,’ Mark Lovie said. ‘It all looks good so far.’

Venture III’s other skipper Alan Addison has also been impressed with the capabilities of the Storm doors.

‘I’m delighted with them,’ he said.

He commented that they haven’t yet had to use them in heavy weather conditions, but confirmed the 10-15% increased spread with twin-rig gear, and added that the Storm doors can push the single rig gear to an additional 20-25% spread.‘We have fished in some extreme tidal current conditions, with our engine power reduced to the minimum for steerage and still towing at five knots,’ he said.

‘Our normal towing speed is four knots with a single trawl, but even under these extreme conditions the Storm doors spread and stayed ridiculously steady,’ he said.

As Venture III entered the current, and towing speed went up to five knots, there was an expected slight drop in gear spread, but the doors remained completely stable, even with this strong following current.

‘There was virtually no roll or loss of stability to be seen on the Scanmar sensors, even with the engine running at minimum power,’ he said.

‘The fishing was excellent, with one 90 minute tow, filling Venture III to capacity – and we can’t ask for more than that!’