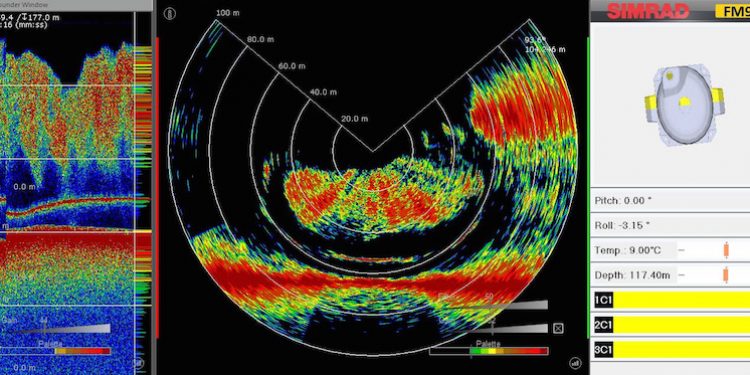 Simrad has announced the arrival of its new FM90 muiltibeam trawl sonar with a near real-time refresh rate to provide a live image of the trawl gear.

According to Simrad, the FM90 is a ‘third wire’ system, which builds on its established FS70 trawl sonar system. In addition to the increased one image per second refresh rate, it features a completely redesigned sonar unit. The FM90 Deployment Pack has a yellow top and black bottom to confirm correct orientation prior to launching and to assist in visual sighting during recovery. It also has improved hand holds to assist handling even with gloves on.

Based on Kongsberg Maritime subsidiary Kongsberg Mesotech’s highly regarded multibeam sonar technology, the FM90 delivers a far superior net outline image compared to one generated by a scanning sonar. Also, unlike, scanning sonar, the FM90 is a solid-state sonar system with no moving parts, which eliminates potential failure points and increases reliability and availability during trawl operations.

Significantly expanding the data generated by the system, the FM90 deployment pack also communicates with Simrad PI/PX 40 kHz sensors (up to a maximum of 6 measurements) by means of hydroacoustic links.

‘The robust, reliable and accurate sensors that make up the FM90 system deliver a real-time view of the trawl opening, its contents and the net itself, which allows skipper and crew to maximise catch while minimising potential system stress and damage,’ commented Simrad’s Thor Bærhaugen.

‘The amount of data available, its quality and the rapid refresh rate means the system can provide significant ROI quickly, when used for all types of commercial fishing.’

The Simrad FM90 introduces new simplified software with automatic adjustments based on an updated version of Kongsberg Mesotech’s tried and tested M3 multibeam processing software, which has been successfully deployed for subsea survey and engineering applications world-wide for more than six years. It features manual override, colour threshold and range settings to assist the interpretation of visual data. Unlike the FS70, the FM90 software does not require a dongle, which experience has shown can be easily lost. The software runs on a marine-grade PC, ensuring reliability of the system in rough seas, while upgrades are provided free of charge through a self-serve FTP site.

Trawlers upgrading from the FS70 to the FM90 will also benefit from being able to use their older system as a back-up, negating the need to purchase a second FM90 deployment pack for redundancy. Simrad has included a 3-foot whip connector with the FM90 so that if required, the FS70 can be plugged into the FM90 system quickly and easily, ensuring trawl operations can continue with the minimum of downtime.