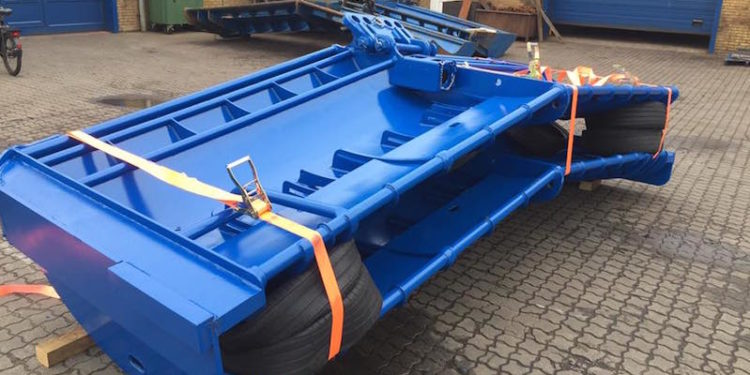 The Slider is a new variant on Thyborøn Trawl Doors’s Flipper doors. While the Flippers have hinged sections that can be folded into place and bolted down to stay there, the Slider’s flaps move on runners.

According to Thyborøn’s Allan Rønn Pedersen, the driver for the sliding flaps instead of hinged panels was for trawlers with limited space where access to adjust the flaps is a problem, and the sliders can be adjusted more easily.

‘Some trawlers need the Flipper doors so they can adjust for different conditions, but only need to make alterations a couple of times a year. They go on the sandeel season so the doors are rigged for that with all the flaps closed and stay that way for weeks. Others need to adjust the doors all the time, so they need to be able to do this easily.’

There’s always give and take in working with this type of gear and while the Slider doors offer greater flexibility, with the flaps capable of being opened half-way, providing more setting options than the open-or-closed Flipper flaps, the downside is that the Slider mechanism with the flaps moving on nylon-lined runners, is more delicate.

‘It’s going to be a lot easier of there are frequent adjustments to the gear, but the mechanism could be more susceptible to damage,’ he said.

The runners and the flaps are tucked away out of the way of trouble inside the cavities of the trawl doors, so there is nothing to snag and the mechanism itself is unobtrusive, with fastenings to bolt the flaps securely in place.

The first pair of Slider doors is a 7.50 square metre in use on Norwegian trawler Nordstar, for both bottom and pelagic fishing, and a 15 square metre set has been ordered for new Scottish trawler Antares, due be delivered by its Norwegian builder in November.

‘They have performed perfectly so far, with no problems on board Nordstar and there’s a lot of interest in these doors,’ he said.

‘We have already been very busy this year with 210 sets of doors sold so far, which is a mix of all types. Production is working flat out to cope with the demand, but we can still do emergency jobs. If someone loses a door, we can fit it into the schedule to get an urgent job done in a week.’