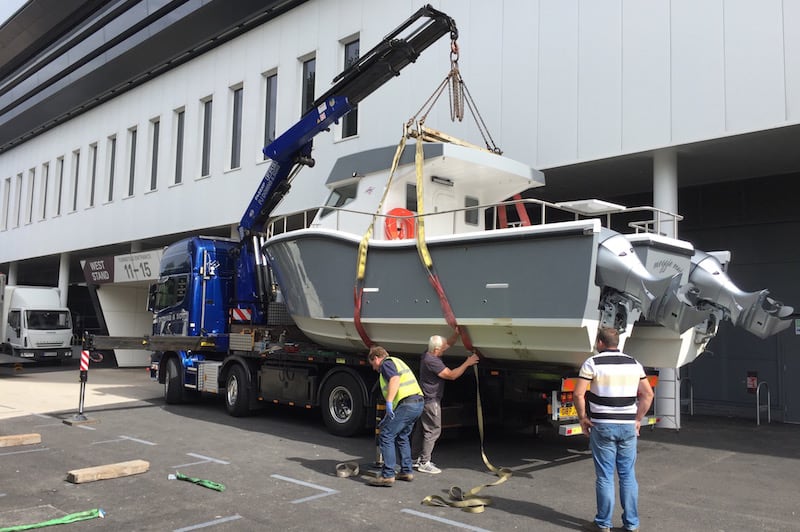 The Skipper Expo International exhibition today opens –back in Bristol in a new venue after relocating from a few years of being held in Bournemouth.

This year the event has four fishing vessels on display and more than seventy stands as it takes place at the Ashton Gate Stadium on Thursday 7th and Friday 8th of September.

‘Build up has been going well and it is great to see the show come together in the last couple of days from carpet laying, stand building and the exhibitors arriving onsite today,’ said show organiser Sharon Boyle. ‘We look forward to seeing all our visitors tomorrow and Friday at the new venue Ashton Gate.’

‘The expo provides a unique opportunity for fishermen from all over England and Wales to see some of the latest fishing equipment and services available on the market today. As well as the boat displays, highlights include creel and potting equipment, ship yards, marine electronic equipment and trawl gear,’ she said.

‘We are eagerly anticipating the expo and I’ll be part of a group of fishermen coming up from Mevagissey,’ said Mevagissey skipper David Warwick.

‘Many fishermen from the south west are delighted that the show is returning to Bristol once again and we are looking forward to attending what promises to be a fantastic event.’

John Balls Chairman of the North Devon Fishermen’s Association, who is also an active shell fisherman working out of Clovelly in North Devon, said: ‘I visited the first show in Bristol and I’m really looking forward to next week’s expo, which I will attend along with a group of fishermen from the north Devon area.’

As well as boat displays, highlights include creel and potting equipment, shipyards, marine electronics and trawl gear. Engines, both inboard and outboard, will be another major feature, along with exhibiting companies covering areas such as ropes, netting, safety equipment, deck machinery, anti-fouling and shellfish holding tanks.

Skipper Expo Int. Bristol 2017 is held at the Ashton Gate Stadium on Thursday 7th and Friday 8th September. Entry is free, with complimentary parking and Wi-Fi on-site. Opening times: Thursday 10am to 5pm, Friday 10am to 4pm.