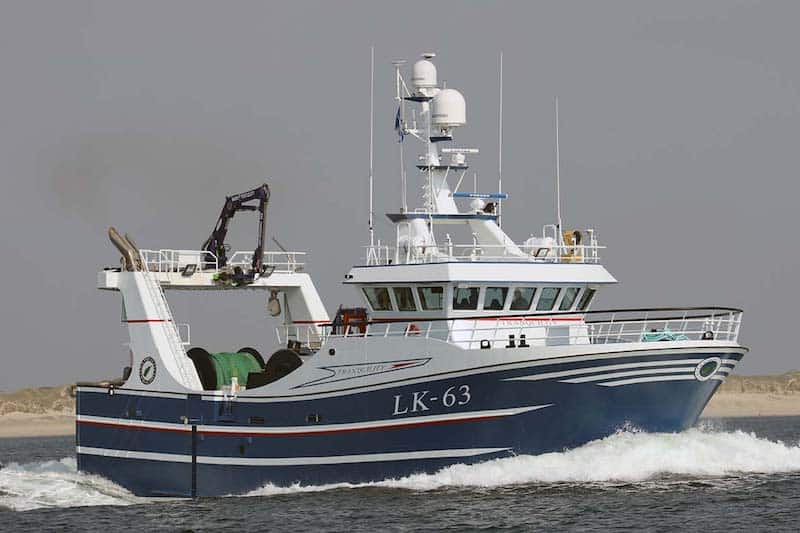 The Tranquility Fishing Company has taken delivery of a new 27.55 metre by 8 metre beam seine netter built at the Vestværft yard in Denmark. Tranquillity LK-63 is the company’s first newbuilding, and follows the older boat the seven co-owners started out with in 2008, and its 2010 replacement.

Skipper Stuart Anderson spends part of the year working on a larger pelagic vessel, fishing for herring as the season starts in August before moving on to mackerel in the winter months.

The spring and summer months are when Tranquility fishes for cod, haddock and saithe, plus some monkfish, working only in daylight with three to four shots a day and the catch generally landed the same day. Sometimes there are longer trips, depending on the fishing, with Stuart Anderson and David Reid taking turns as skipper.

There is a Vest-El system on board, which has been in development for several years and is capable of co-ordinating the vessel’s systems via a double display in the wheelhouse. The system co-ordinates the engine management, lights, pumps, fuel and water tanks, and cooling. Tank capacities are for 36,000 litres of fuel and 12,000 litres of fresh water. Accommodation is for up to nine persons on board.

The deck is laid out with the winches lifted higher than usual, which Stuart Anderson said provides a great deal of working space, plus increasing the beam by 30cm has increased the fishroom capacity as well as the working area.

The deck equipment and hydraulic installation have been handled by Thyborøn Skibs and Motor, with a pair of 18-tonne pull winches capable of holding 4000 metres of 44mm diameter seine rope. There are three double net drums under the aft gantry, plus a codend winch. Cranes are from Thistle Marine, with one deck crane and a powerblock crane for handling fishing gear.

Thyborøn Trawlbinderi supplied Tranquility’s seine nets. The 1220 mesh Combi Flyshooter net is designed to suit hake, haddock and whiting, and is rigged on a 55.20 metre footrope with 4, 5 and 6 inch discs and 100 deep-sea floats. The 1060/60 high lift Balloon Flyshooter gear is for cod, haddock and hake, and is rigged on a rockhopper footrope with 10 and 12 inch discs.

Catches are dropped below to the catch handling deck for sorting, gutting and washing. VCU supplied the complete catch handling system, with a sorting conveyor, bins and two bubblejet washers. The sorted fish are transferred to the fishroom to be boxed and iced. VCU also supplied its Catch Management System for precise recording of weighed catches, and boxes are weighed using a pair of Marel M1100E scales. Lemvig Maskin & Køleteknik supplied the two 3000kg per day ice machines and the fishroom chiller system.

Tranquility Fishing Company has its own quota of whitefish that is placed in the Shetland pool administered by LHD. According to Stuart Anderson, the scheme means they have stable rental prices without uncomfortable peaks.

He commented that during the build process, there was outstanding co-operation with Vestværftet, with contributions from the yard during the design and build that will optimise workflows on board, as well as improving levels of safety and comfort on board Tranquility.

Newbuildings from MEST for Bakkafrost