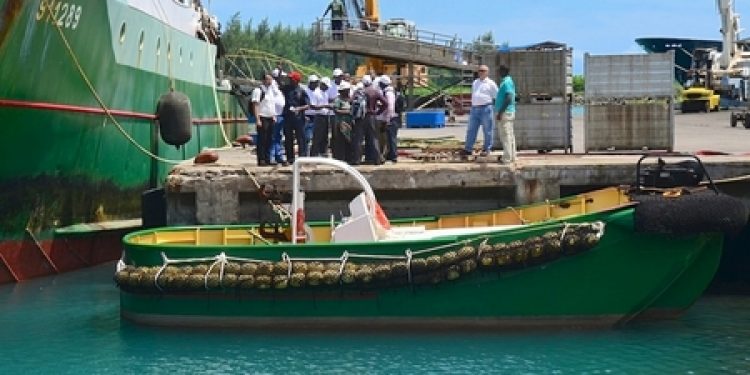 Two IOTC Members working together to implement Port State Controls in the Indian Ocean to improve tuna vessels compliance with IOTC conservation and management measures
In March 2010, IOTC Members States adopted a Port State Measures Resolution aiming at preventing, deterring and eliminating illegal, unreported and unregulated fishing in the fisheries for tuna and tuna-like species in the Indian Ocean. The resolution came into force on March 1st of this year. The IOTC PSMR resolution constitutes a very cost-effective tool in the tool box of MCS practitioners of the countries in the Indian Ocean. When working in conjunction with other controls, Port State measures are seen as an important component of an integrated and modern approach to combat illegal fishing.

In May 2011, the Indian Ocean Tuna Commission (IOTC) has held a one week workshop in Seychelles for nine of its Member States and one Cooperating non-Contracting Party. The objective of the workshop was to impart to the participants the required knowledge for them to follow up with their respective administrations to facilitate the implementation of the IOTC Port State Measures Resolution.

As a follow up to the recommendations of workshop and to fulfil their obligations to the IOTC, Mozambique and Seychelles with the support of the IOTC secretariat have organized a joint training course from 28 November to 5 December 2011. The course focused on the inspection of tuna fishing vessels in ports for compliance with IOTC Conservation and Management Measures.

Mozambique is now taking steps to enhance its capacity to control and manage its maritime fisheries resources in a sustainable and responsible manner in accordance with national, regional and international agreements, commitments and obligations. Consequently the course was of upmost importance for the news created Directorate of Fisheries Surveillance of Mozambique due to the new MCS rules set for tuna foreign fishing vessels wishing to operate in Mozambique waters. As from 2012, in line with Port State controls responsibilities, tuna longliners and purse seiners will be subject to pre-fishing briefing and inspection before the issue of the fishing licence and as a condition to engage in fishing activity for tuna and tuna like species in Mozambique waters. The fishing fleets under such MCS rules comprises of Japanese longliners as well as EU purse seiners and longliners operating under and outside the FPA signed in June 2011 between Mozambique and the European Union.

The intent of the pre-fishing briefing is to bring greater cooperation between the industry and government for the responsible management of the fisheries resources in Mozambique and the waters of its regional partners. The pre-fishing briefing will allow the captain and owners of the tuna vessels to acknowledge the rules that govern the tuna fishing activity in Mozambique. Upon the briefing the fishing captain will signed an acknowledgement form to certify he understands the fishing rules in Mozambique, that he will comply with the Conservation and Management Measures adopted by the Indian Ocean Tuna Commission.

The intend of the pre-fishing inspection is to improve the knowledge on the tuna vessels operating in the Exclusive Economic Zone of Mozambique, specifically the functionality of several catch reporting systems implemented to monitor the fishery. To that effect a specific inspection form was designed to verify the compliance of fishing vessels with regards to the fishery technical management measures adopted by the IOTC members. The inspection form deals specifically with the documentation on board, presence and format conformity of the fishing logbook, marking of fishing vessels, marking of FADs, the presence and use of mitigation devices to avoid by-catch of seabirds, the presence and use of specific equipments for the release of marine turtle caught accidentally, and the presence and functionality of the Vessel Monitoring System (VMS).
Manuel Castiano, Director of Fisheries Surveillance of Mozambique, reiterates the commitment of the Government of Mozambique to fight against IUU fishing: “Any actions contrary to the Mozambican law and IOTC management measures will be considered as a “Serious Violation” under Mozambican law as defined in the United Nations Fish Stocks Agreement, Article 21 paragraph 11. Non-compliance will be subject to maximum application of Mozambican penalty mechanisms including, but not limited to: confiscation of fish catch, vessel and fishing gear, financial penalties and charges against the captain and/or the vessel “operator”.

Seychelles is also in the process of finalising the update its fisheries legislation to make it more dissuasive for non-compliance whilst also bringing it in line with conservation and management measures of IOTC and other bodies it is party too.

The early implementation of these controls in the Indian Ocean since this year by IOTC Members makes IOTC the leading fisheries organization in the world in this area, and the IOTC secretariat is actively encouraging others members to replicate such initiative in order to share enforcement experience of IOTC management measures and strengthen the fight against IUU fishing in its area of competence.
The Indian Ocean Tuna Commission is an inter-governmental organisation made up currently of 29 Member States and four Cooperating non-Contracting States. The IOTC has the mandate for the conservation and management of tuna and tuna-like species in the Indian Ocean and its Headquarters is in Seychelles.