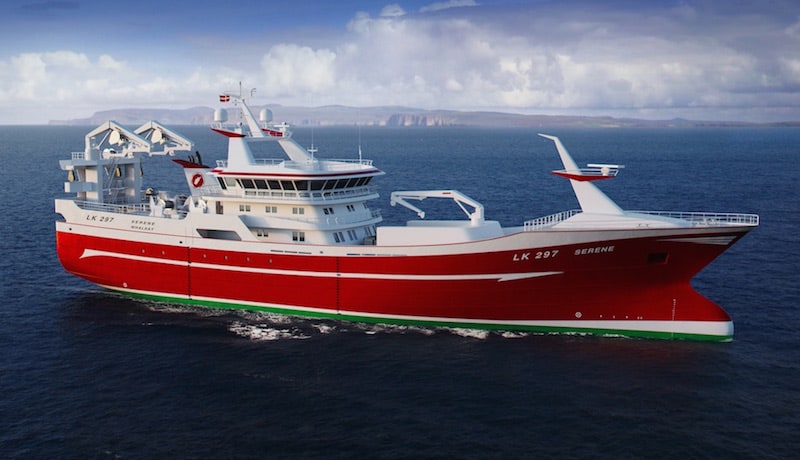 Serene a milestone for Danish yard

The order for Serene Fishing Co, placed at the Skipper Expo Aberdeen, marks a milestone for Karstensen Shipyard, as this represents the yard’s first newbuilding for Shetland owners.

The seven-strong partnership behind the company goes back to 1969 when the first Serene was delivered. Back then the partnership was headed by legendary skipper Magnus ‘Mackie’ Polson. Three of the original partners remain, headed by skipper Bobby Polson. The seven partners are Bobby Polson, Tommy Eunson, David Shearer, Leonard Polson, Gilbert Williamson, Bryan Sutherland and George Polson.

The Serene Fishing Company has had newbuildings in 1995, 1998 and the present Serene was delivered in 2009. This vessel will be sold to Henning Veibust in Norway and is due to be delivered in February next year, with the new 82 metre Serene due for delivery in June 2018 with an estimated price tag of €31million.

‘We are delighted with this new contract. Like other pelagic newbuildings currently under construction at Karstensen, this vessel is an in-house design,’ said Kent Damgaard of Karstensen Shipyard. ‘The yard has orders for no less than ten pelagic vessels, which are to be delivered throughout the next three years. Karstensen Shipyard offers a complete concept, where all solutions are optimised and tailor made to customer specifications and requirements. Karstensen is independent of all suppliers, which makes such an optimisation very flexible. ’

‘Serene’s design, specification and arrangements is a result of an extensive and close co-operation between the owners and the yard. The main focus has been on optimising working, safety and comfort for the crew, as well as optimisation of catch handling- and storage facilities, and fuel consumption,’ he said.

MAN has been chosen as supplier of the propulsion plant, including a 12VL32/44 CR main engine. This will be the first slow revving main engine in Shetland/Scotland with common rail fuel injection system. The propeller design will be optimised to the specific service profile of the vessel, with rpm’s between 110 and 135. This will ensure optimum bollard pull for trawling, as well as good free-sailing characteristics.

MAN will also supply the 2 heavy duty main auxiliaries, each unit driven by a MAN 6L21/31 engine. In addition, the vessel will be fitted with 125 respectively 250 kW harbour- and emergency gensets. The propeller and gearbox are coming from Scana Volda.

Karmøy Winch has been chosen as the supplier of the full deck machinery package, including heavy-duty 90t trawl winches and 110t net drums. Brunvoll will supply thrusters, Johnson Controls will supply the RSW plant and the vacuum system has been ordered from Iras.