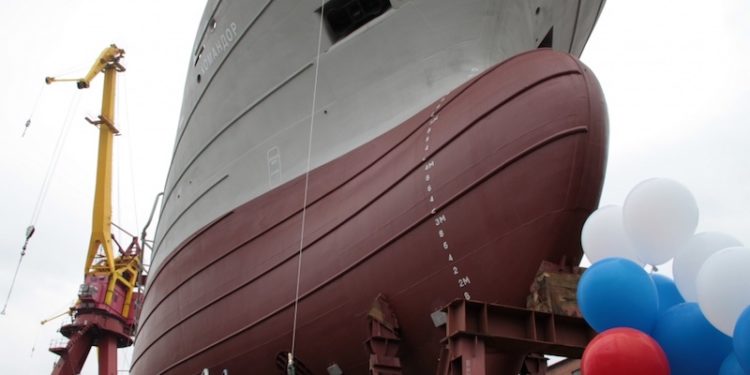 The Yantar shipyard in Kaliningrad has launched the second of three pelagic vessels being built for a company in Russia’s Far East. The fleet of three Skipskompetanse-designed pelagic catchers is due to be delivered to the customer in 2019.

Pelagic trawler/purse seiner Komandor hit the water yesterday at the Yantar yard in Kaliningrad, and the previous day had seen the contracts signed for the provision of investment quotas for the three vessels in the SK-3101R series.

‘This is a unique vessel, a completely new class,’ said Sergey Tarusov, chairman of the VI Lenin Collective Farm in the Petropavlovsk-Kamchatka region of Russia which placed the order the three pelagic vessels.

‘They will be able to operate on all of the resources in the eastern region with different fishing gears. Purse seine fishing is very relevant now that ivasi have returned to our waters. We will be able to deliver raw material to produce high-quality seafood products for Russian consumers.’

‘Today I see your work and I want to sincerely thank you for the work done,’ Sergey Tarusov said, addressing the yard’s staff.

‘I think, our co-operation with the yard will not end with these vessels, and we will continue it with new orders.’

Komandor’s godmother, Elena Olenova, who heads the Collective Farm’s legal department, sent the new ship into the water by smashing the traditional champagne bottle against its hull.

Representatives of the VI Lenin Collective Farm, Skipskompetanse, the Ministry of Industry and Trade, the Federal Agency for Fisheries, United Shipbuilding Corporation and the authorities of the Kamchatka Territory and the Kaliningrad Region all attended the ceremony at the Yantar yard.

The lead vessel in the series, Leninets, was launched in November and is being fitted out. Komandor has now been launched and the hull of the third vessel, Udarnik, is under construction.