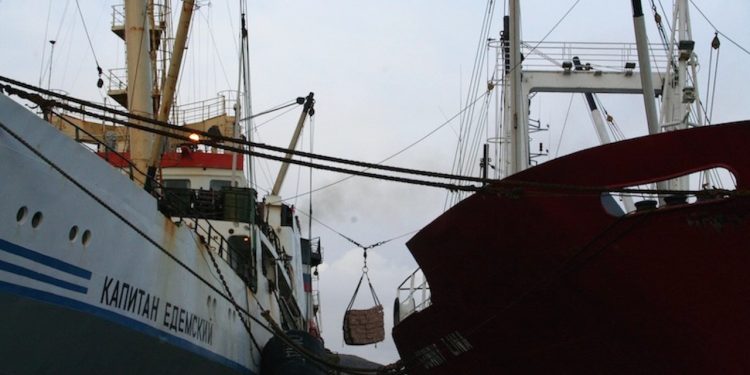 The Scottish Pelagic Fishermen’s Association has hit out at the ongoing presence of Russian factory vessels operating in the grey zone shared between the UK and the Faroe Islands.

This comes against a backdrop of the brutal war being fought in Ukraine and the international condemnation of Russian aggression.

‘The Russian fleet is being fully serviced by the Faroe Islands, including re-fuelling and the ability to tranship catches to reefers. The proceeds of this fishery will further fuel the war effort by the Kremlin.  This is a deplorable action by Faroe Islands to continue this relationship with Russia while we watch the atrocities in Ukraine.’

According to the SPFA, the shared (grey) zone between the UK and the Faroes was primarily intended for oil and gas exploration, but also includes an agreement on fisheries.

A further aspect of the background to this is the continuing failure of coastal states to agree on shares of pelagic fisheries in the North Atlantic, with nations setting their national quotas based on their own notions of what their share of each fishery amounts to, In this case, the Faroe Islands have set a unilateral quota of 267,400 tonnes, while Russia awarded itself a 55,800 tonne quota.

The Faroe Islands have long exchanged access to blue whiting for groundfish quotas in the Barents Sea for its demersal trawlers. The SPFA states that it is uncertain how much of the Faroese quota has been exchanged with Russia for Barents Sea groundfish.

‘The Association had pre-warned both the UK and Scottish governments that it was likely that Faroe Islands would grant licences to the Russian fleet to fish blue whiting in the ‘special area.’ And this has indeed happened,’ Ian Gatt said.

‘The Association recognises that both UK and Scottish governments have been working through diplomatic routes to try and dissuade Faroe Islands from licensing Russian vessels to fish in what is mostly UK waters – but this has failed. It’s imperative that the UK now revisits its fishery relationship with Faroe Islands.’