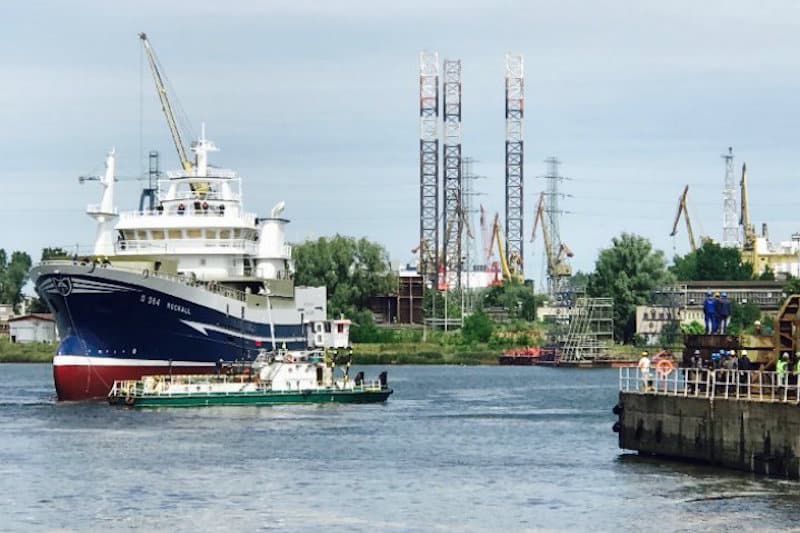 The Nauta Shipyard’s newbuilding division in Gdańsk has launched the latest in a series of new fishing vessels for completion at Karstensens in Skagen.

The 69.90m by 14.20m Rockall is built for Danish company Astrid Fiskeri and is similar to the Grateful, now in the process of being completed for owners in Scotland and expected to be ready for delivery shortly.

Rockall will replace an older vessel of the same name, and will join the Danish-Swedish company’s Astrid, which was delivered in 2014 by the same yards.

Built to a Karstensens design, the new Rockall will fish for both industrial species such as sprats and sandeel, as well as mackerel, herring horse mackerel for human consumption and the 1970 cubic metre capacity trawler will also be fitted out with three 80-tonne pull trawl winches that give it the capacity to tow twin trawls. It will also have four net drums for handling fishing gear.

The design incorporates a 2999kW main engine driving a 4200mm diameter propeller for optimal bollard pull, as well as 950kW and 550kW auxiliaries, 850 and 950kW thrusters and a twin 1100kW RSW installation.

Rockall in the tenth in Nauta’s series of newbuilds and this is the third fishing vessel launch this year.

‘We have built ten fishing vessels for Karstensens Skibsværft so far and we currently have seven under construction,’ said Reza Sohrabian, head of marketing at the Nauta Shipyard’s newbuilding division.

‘Long-term co-operation and subsequent orders are proof of our customer’s confidence and satisfaction with the quality of our work,’ he added.

Nauta specialises in fishing vessels and since the newbuilding division in Gdańsk opened in 2013 has signed 22 contracts. In addition to its fishing vessels, Nauta is busy with research vessels and is also constructing a special purpose signal intelligence vessel for the Swedish navy.