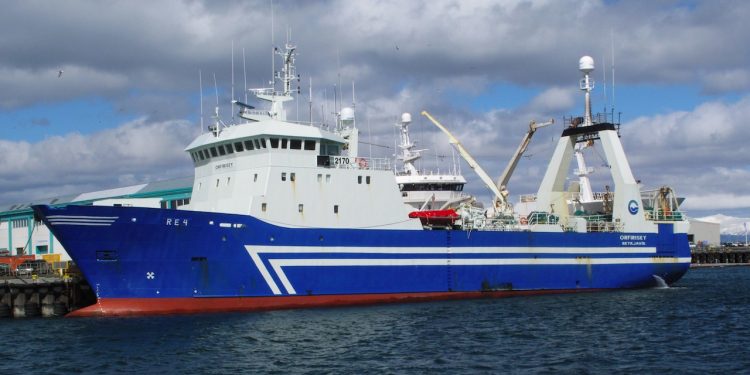 Skippers at Icelandic fishing company Brim have to be cautious to keep clear of golden redfish following a cut on the quota for the 2022-23 quota year – although they report there are redfish on all grounds that it’s almost impossible to avoid.

Before docking earlier this week with a 80-tonne trip and then heading for a maintenance lay-up, fresher trawler Helga María’s skipper Friðleifur Einarsson said that while they have seen redfish everywhere, they were able to catch more saithe than redfish during this later part of the trip.

‘It’s very difficult to tell if you’re shooting on saithe or redfish, but we were fortunate enough to have more saithe than redfish. The autumn has long been seen as a poor time for redfish, but now we have to make every effort to avoid redfish becoming the bulk of the catch. That isn’t just on the traditional redfish grounds here off the south. The situation on the Hali grounds isn’t much better,’ he said.

‘There’s no denying that the reduction in the golden redfish quota puts us in a difficult position in relation to fishing for other species. Now we only take redfish as by-catch and as far as I can see, that’s the way it’s going to be for the rest of this quota year.’

The situation is much the same for the company’s factory freezer vessels, and Örfirisey’s skipper Ævar Jóhannsson the whole fleet is searching for saithe, but the presence of golden redfish complicates everything.

‘We’re hunting for saithe – like the rest of the trawler fleet. There’s saithe here, but unfortunately there’s also golden redfish and that makes all fishing a challenge,’ he said.

‘We started the trip on the Hali grounds. There’s saithe to be seen there, but also a lot of golden redfish. We have to be extremely careful to not catch too much redfish with the saithe. When we had 20% of our redfish allocation for the trip there was nothing for it but to try elsewhere,’ he said, adding that this took them to the banks west of the Westfjords.

‘We’ve been on the Strandagrunn and Barðagrunn grounds, among other places, and there was great fishing for haddock in some areas. We aren’t fishing much for cod, but what we could take this trip was caught quickly and easily.’