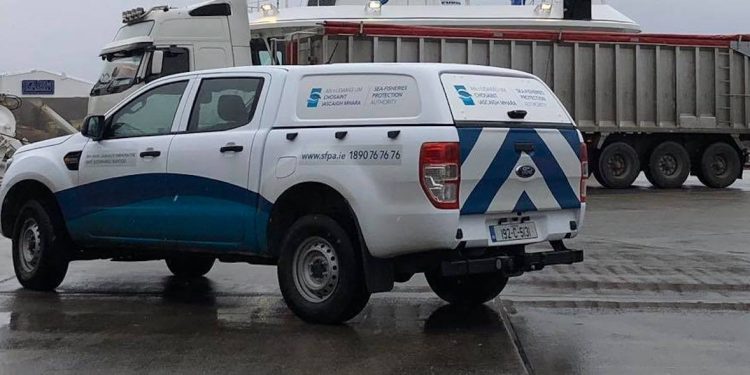 The decision by Ireland’s Sea Fisheries Protection Authority (SFPA) to recently select Killybegs pelagic trawler Genesis to undergo a random but highly controversial type of ‘weighing at point of landing’ system has resulted in massive ramifications for Irish fish processors who say that this could have a huge impact on Killybegs’ fish factories and for the thousands of seasonal workers who rely on them for income, reports Cormac Burke from Killybegs.

The SFPA have been in dispute with Irish pelagic processors ever since the results of an EU Audit into the operation of pelagic weighing in Killybegs in 2018 resulted in the SFPA threatening to weigh fish at the point of landing – as opposed to in the factories.

The industry is adamant that ‘at-point weighing’ of fish plus the refrigerated water must be suspended to maintain guaranteed fish quality, and to produce an inaccurate weight of fish would force vessels to illegally declare more fish than was actually landed in official returns.

It is understood that the processors have tried to co-operate with the SFPA and have proposed the development of an alternative method of accurately weighing at the pier and have even called on the SFPA to intensify their scrutiny of factory weighing for the Spring pelagic fishery which lasts only for another few weeks. With the SFPA refusing to continue with the well established and EU-approved system of weighing the net weight of fish at the factories, the new Irish system of monitoring demands that fish are either (i) landed into a ‘de-watering’ hopper while being weighed or (ii) put in the lorry tankers (as was normal procedure) and checked on the weighbridge.

The latter sounds reasonable – except that in this situation, the tanker must, under EU Regulation Article 60.1, carry no more than 2% water – thereby undoing all the previous effort in keeping the fish flooded to maximise quality.

The problem for the fishermen is that once the water is drained from the fish, either through the ‘de-watering’ hopper or in the tankers, their own weight causes them to compact on themselves, destroying quality and leaving the fish of little use to processors or on the international market.

Killybegs vessel Genesis was selected for this type of landing regime just two weeks ago at the height of the vital mackerel season and, understandably refusing to compromise the high quality of their €1300 euro per tonne mackerel, agreed to the tanker and weighbridge option but with approximately 18.5% water. This resulted in their 800 tonnes being recorded by the SFPA as 932 tonnes – a volume amount of fish that this vessel hasn’t the capacity to carry in its RSW tanks. This also means a loss of 132 tonnes of (uncaught) fish off that boat’s annual mackerel quota, with a first sale quayside value of €171,600 lost to the vessel and even more in processing and export values, in addition to the loss of earnings to factory workers and the local economy in general.

This represents a massive value loss to the owners of Genesis for just this single landing, and if multiplied across Ireland’s 23 main pelagic licensed vessels for an entire season, would represent a loss of millions – not just to the owners themselves but also to the economies of processing factories that the populations of so many rural coastal areas rely on for seasonal income.

‘The landing/weighing system we are seeing enforced by the SFPA in Killybegs results in two different sets of figures,’ explained Danny Hurley of FastFish Ltd who are agents for the sale of fish from six Irish vessels who supply Irish fish factories.

‘The first set of figures will be the SFPA’s gross ‘fish plus water’ weight on the quayside and the second will be factories net ‘actual volume of fish’, which is a recording verified under the Official Pelagic Weighing Record (OPWR) – obviously the gap in these two amounts represents a huge monetary value to the boat and factory, and loss of quota for the vessel over the course of a season,’ he said. ‘

More to the point is that someone is expected to sign off on the SFPA’s recorded figures from a vessel – figures which, under this system, are clearly an inaccurate recording of landings,’ he added.

With large pelagic vessels from various other countries being regular seasonal visitors to land fish in Killybegs, this action by the SFPA will certainly be cause for concern among the international fleets that help keep the Irish processing industry going with their landings.

Who watches the watchers…?

Since its establishment in 2007 under the brief of Minister Noel Dempsey during his term at the Department of Agriculture, Food and the Marine (DAFM), Ireland’s fishing industry supposed ‘caretakers’, the Sea Fisheries Protection Authority (SFPA), has raised many questions throughout the fishing industry for their seemingly anti industry actions – and, more importantly, for their apparent lack of accountability to any Government body, industry representative group or individual.

Such is the perceived control and power at the SFPA’s disposal, any journalist attempting to write an article that might question this body’s actions will be faced with the problem of those in the industry frustrated by the fact that they would like to comment but live in fear of the potential recriminations against their vessel or processing factory.  Hitting the industry  In terms of value and of revenue within the Irish fishing industry, it is without doubt the multi million euro pelagic sector (mackerel, herring, scad and blue whiting) which seems to be in the SFPA’s line of fire in recent years.

While anti-industry propaganda was being fed to national journalists by ‘persons unknown’ during a period a decade ago when this sector was being harshly dealt with in paying for sins of the past, today no one in the media seems to want to know that this sector in Ireland is by now the most regulated in Europe, if not the world, but still the SFPA continue with a regime of attack and control despite, as one vessel owner put it, there no longer being ‘any skeletons in our cupboard, and there haven’t been for many years.’

The decision to force such a rule on the Killybegs-based Genesis came less than a month after Irish industry representatives held a meeting with SFPA officials in Galway in which a compromise was reached that, at least until autumn 2020, the enforcement of this new method of landing would be restricted to the lower value blue whiting fishery (and only those not intended for human consumption) – an understanding that was reneged on despite industry representatives unanimously confirming that an agreement was clearly reached on matter.

Perhaps the most notable point in all of this is that the SFPA, when approached regarding what the industry sees as unreasonable enforcement of the regulations, will repeatedly respond that these are ‘EU rules being handed down’ and they [the SFPA] are merely carrying out their duties – which in itself does sound understandable — but they fail to inform the industry, or the general public that, more often than not, these ‘EU rules’ are based on recommendations that have come from Ireland [at the behest of the SFPA] on how the industry should be managed.

This theory is more than just hearsay and, less than 18 months ago, an audit of the SFPA efficacy conducted for the EU Commission on the monitoring and control of the Irish fishing industry was reportedly damning with regard to the policing of the Irish sector and, naturally, led to the expected response from the EU that Ireland needed to ‘toughen up’ its authority over the industry.

Many within the industry feel that most of the SFPA staff are doing their best to cope with a situation they are often uncomfortable with and many of them share the frustration of the fishermen. But it is of some concern to those in the industry to hear rumours of unrest, disillusionment and often total disarray within the seemingly dysfunctional SFPA body itself – to the extent of reported occurrences of SFPA staff reportedly disagreeing, or even refusing, to undertake instructions from their own officials – all of which again begs the question of accountability and of who is monitoring this industry authority?

To date, the audit report presented by the SFPA to the EU has yet to have been made public, nor have Ireland’s fishing industry representatives been allowed to see it or indeed the Irish Government’s response to the audit.