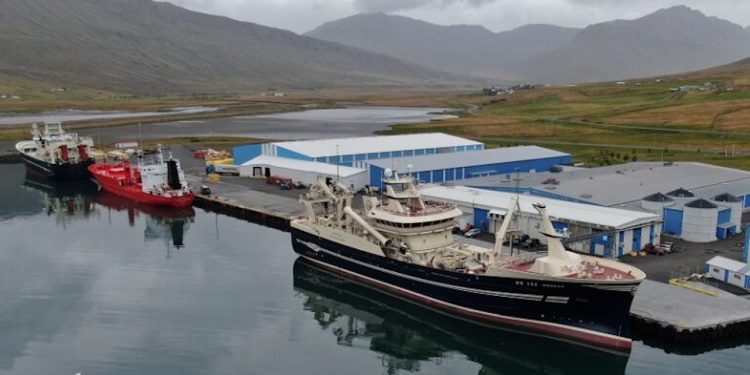 With a couple of months still to go, 2021 is already a record year for Síldarvinnslan’s Neskaupstaður factory.

There has has hardly been a break in production since June, with three shifts working around the clock, to process approximately 60,000 tonnes of mackerel and herring.

At the beginning of the year, around 10,000 tonnes of capelin were processed at the plant, making its total of pelagic production over 70,000 tonnes for this year to date. The plant’s previous record year was in 2012, when 63,000 tonnes were processed.

Raw material is still being delivered, with Börkur landing 1360 tonnes of Atlanto-Scandian herring, on the heels of Bjarni Ólafsson with 1100 tonnes.

According to plant manager Jón Gunnar Sigurjónsson, they can be satisfied with their achievements this year.

‘Everything has worked out perfectly. We have a great workforce here and fishing has been good. Fishing is managed so that we are always working with fresh, good-quality fish. Now there is just one more landing of Atlanto-Scandian herring to come, and then there’s a switch to Icelandic summer-spawning herring,’ he said.

‘Then we have a giant capelin season ahead of us and we’ll have to get busy. There’s frequently feed in the capelin at this time of year, so we might not see frozen production start until the New Year. In this business it’s essential that fishing and processing are managed as a whole. When that happens, we get the great results we have been seeing.’

The Síldarvinnslan fleet’s blue whiting season is about to come to an end, with Beitir landing 1630 tonnes in Neskaupstaður. The other pelagic vessels, Barði, Börkur and Bjarni Ólafsson, are still at sea.

According to Beitir’s skipper Tómas Kárason, fishing has been respectable, with 18-hour tows for hauls of 300-380 tonnes.

‘We’ve been fishing south of the Thors Bank, just north-west of the Icelandic-Faroese line. The blue whiting is coming to an end, but we have plenty of work ahead of us. We’re now heading for our last Atlanto-Scandian herring trip, followed by Icelandic summer-spawning herring. Then there’s the capelin season ahead. This is going to be huge and there’s a lot of excitement about this,’ he said.