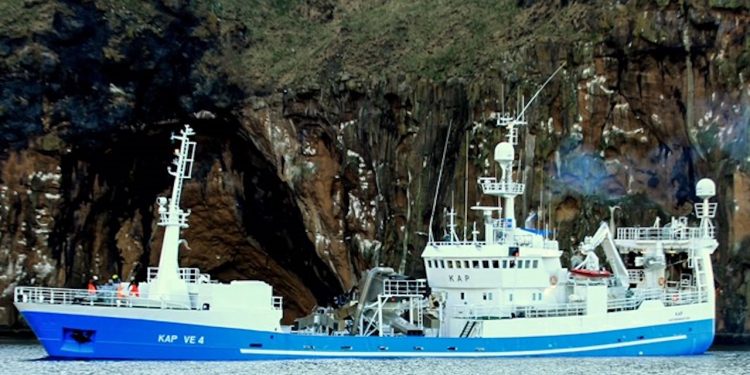 Pelagic vessels are lining up to land at Síldarvinnslan’s plants in Neskaupstaður and Seyðisfjörður, and the first capelin landings of the season have arrived at the Vinnslustöðin plant in the Westman Islands.

In Neskaupstaður Vilhelm Thorsteinsson landed 2750 tonnes on Saturday, followed by Beitir with 2500 tonnes and Bjarni Ólafsson with 1900 tonnes. Hákon docked in Seyðisfjörður with 1650 tonnes, followed by Greenland-flagged Polar Amaroq with 1300 tonnes and Polar Ammassat with 1850 tonnes.

According to Börkur’s skipper Hálfdan Hálfdanarson, fishing has been acceptable, but the weather is poor.

‘We’re gone west towards Grímsey as the weather is forecast to improve here before it gets better further east. Fishing has been fine for the last few days, with good hauls during the day, but as usual, not much during the night,’ he said.

‘Our best haul has been 920 tonnes, and normally it’s around 400-500 tonnes. We have 2655 tonnes on board and now we’ll be heading off to join the queue to land in Neskaupstaður and Seyðisfjörður. The season looks good, but a lot depends on the weather.’

In the Westman Islands Kap landed the first capelin of the year to Vinnslustöðin’s plant, followed by Ísleifur and with Huginn on its way from fishing grounds off the north coast. Between them these three are landing around 5000 tonnes of capelin.

‘We can expect all the discharging to be complete tomorrow night and there’s a busy time ahead of the meal plant for the next few days,’ said VSV’s pelagic division head Sindri Viðarsson.

‘The capelin season is certainly in progress and that’s great. All the same, there’s no heavy fishing so far, but it’s steady.’