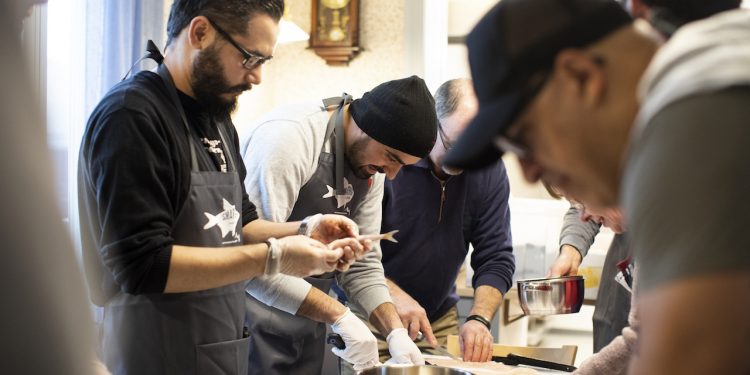 An initiative to get community members and migrants to create innovative recipes from underused fish species has been supported by the Ostrobothnia FLAG in Finland. As a result, the consumption of less valued fish increased, and the cultural interaction and integration of migrants improved.

Fisheries are an important element of Finnish national identity and food culture in both coastal and inland areas. Locally caught fish is considered a resource that could be used more efficiently,

especially when it comes to underexploited species such as bream, roach, ide and smelt. However, most of the under-utilised fish species are not well known or valued by consumers and restaurants.

After an influx of migrants in 2015, there was a growing need to enhance the activities to build ties between migrants and local communities. To address both challenges, the Smartfish project aimed to improve the knowledge and consumption of local fish species, as well as integrate migrants from different cultures to local communities through cooking events and exchanging experiences. A new integration model for migrants and innovative recipes for under-utilised fish species were developed through this project.

The project aimed at changing consumer perceptions towards less used fish species by highlighting their positive aspects, such as their low environmental footprint and short transport distances. For example, the Finnish fisheries contribute to a phosphorus reduction of 700 tonnes annually from the Baltic Sea, which is twice as much as the targets for land-based reduction.

The project was implemented by the Martha Organisation, which carries out cultural and civic education and does advocacy work in Finland to promote wellbeing and quality of life. This Finnish-Swedish organisation has broad knowledge on local food production and disseminating information about sustainable ways of living.

The most distinctive feature of the Smartfish project was that it brought together new groups of people, notably improving the interaction of migrants with the local communities and fishers. Thus, the innovative use of local fish species acted as a catalyst for integrating immigrants with local people, and participants learned about different food cultures to cook fish dishes in new ways.
To provide geographical spread and test how the integration method works in different areas and in groups with different sets of languages, 13 events were organised in three municipalities (Petalax, Kristinestad, and Jakobstad).

Besides the migrants, various guest lecturers, commercial and recreational fishers, industry representatives, seafood processors and restaurant owners participated in the courses. The involvement of professional fishers in the training was useful for the participants, as they had no previous experience in catching or preparing fish (under ice fishing, cleaning or filleting fish).
Participants also learned about the work of commercial fishermen.

By bringing different groups of people together, this project found an original way to improve social integration, while increasing local fishers’ incomes in an environmentally sustainable way. Cooking is one of many activities that can be used to promote marine heritage and local products, while creating opportunities for the different communities in your area to meet and learn from each other.