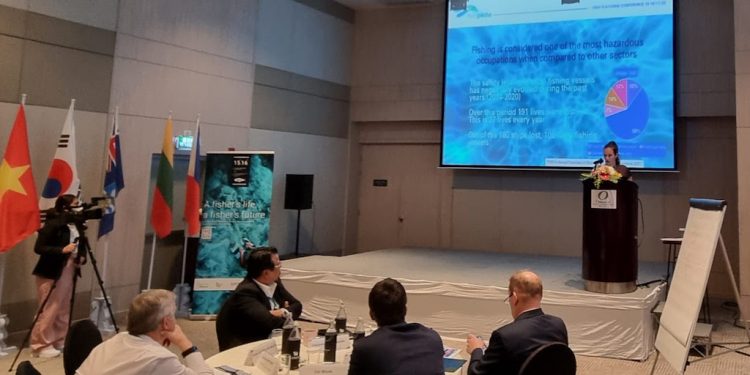 The FISH Platform has been active and influential as an informal group of experts focusing their efforts on health and safety issues in the fishing industry. So far, it has been primarily active in Europe, but has now held its first international conference in Thailand.

On a global scale, most commercial fishing people are located in Southeast Asia, a region characterised by a low level of ratification of international conventions aimed at protecting fishermens’ health, safety and working conditions.

The Platform considered it about time for public authorities, experts, employers and workers to come together to share experiences in the implementation of such conventions, social dialogue, and to jointly push for the sustainable management of the fishing industry.

European industry body Europêche also took part in the gathering in Thailand to tackle one of this industry’s endemic problems – safety.

Recent research indicates that there are an estimated 100,000 fishing-related deaths annually, of which the overwhelming majority take place in Asia and Africa, notably in inland and coastal fisheries. In blunt terms, every five minutes, a fisherman’s or fisherwoman’s life is lost.

Europêche’s position is that it’s a highly regrettable situation when international instruments aimed at protecting the life of 35 million people working in the fishing sector have not been widely ratified.

One of the main goals of this conference was to engage with stakeholders in Asia in the work of advocating human and labour rights for fishers and to support the development of pathways to ensure workers’ protection. By way of example, in the Thai fishing industry, on average 60% of fishermen working on these vessels originate from neighbouring countries such as Cambodia, Myanmar, and Laos.

Like Europe, Thailand is dealing with a lack of motivation among the new generation to join the industry.
A challenge for Thailand remains the ratification of key conventions for the safety of fishing vessels (Torremolinos Convention) and for training and certification (STCW-F). However, Thailand was the first Asian nation to ratify the ILO Work in Fishing Convention (C188) aimed at protecting the living and working conditions of fishers on board of vessels.

Europêche senior policy advisor Rosalie Tukker spoke about the importance of social dialogue and its ability to together with the workers address the gaps in the social dimension of fisheries and lead international effort to improve safety and working conditions, making key stakeholders aware of the human side of the sector, which is often forgotten.

‘Fishing is significantly safer in Europe, but it remains a global concern particularly in developing countries. For Europêche it is an absolute priority to protect the lives of those working at sea,’ she told the conference.

‘Fishing stands at the beginning of an international seafood supply chain. Seafood remains one of the most traded commodities in the world and that concerns the EU market. We strive to make sure that fish products are harvested with high standards of safety and due respect to human and labour rights.’
She commented that Europêche, under the leadership of the FISH Platform, will continue to provide a stage for all who wish to improve fishers’ lives and aims on working more closely in the future with Asian countries towards that goal.