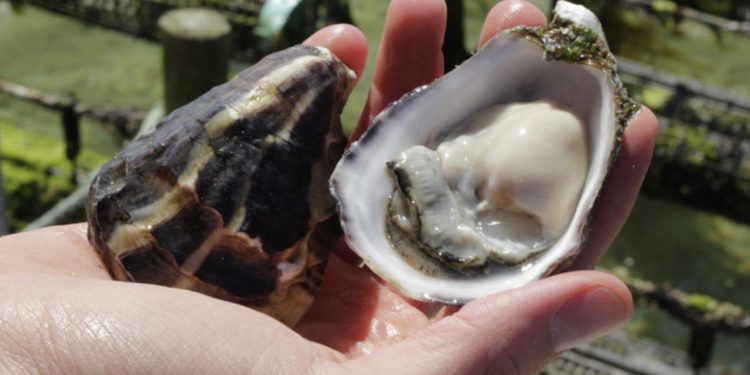 A major Australian oyster fishery known for its pristine waters and strict biosecurity controls is ramping up production again after a three-year programme to safeguard itself against Pacific Oyster Mortality Syndrome (POMS).

The latest forecasts predict oyster production in South Australia to grow in the 2019/20 financial year for the first time since 2016/17.
In February 2016 the local oyster industry was affected by a severe supply shortage due to a POMS outbreak in Tasmania, where South Australian growers traditionally sourced 80% of oyster spat.
In line with South Australia’s strict biosecurity laws, there was a ban on South Australian growers importing Pacific Oyster spat from Tasmania in a bid to stop the disease spreading to the state’s growing regions on the Eyre and Yorke peninsulas and Kangaroo Island.
However, due to grow out times of between 18 months and two years on most South Australian oyster leases, the full impact of the shortages did not hit the farm gate until late 2017.
BDO EconSearch puts together an annual report for South Australia’s Fisheries and Aquaculture division to measure the contribution of each seafood sector to the state’s economy.
The 2017/18 financial year report is expected to be released by Primary Industries and Regional Development Minister Tim Whetstone in the coming weeks.
Preliminary results show that the farm gate value of the state’s oyster industry halved from about $40 million in 2016/17 to $20 million last year despite a 20% increase in prices.
South Australia produced around 5.1 million dozen of Pacific oysters in 2016/17 with volumes slumping to a preliminary estimate of just under 2.2 million dozen in 2017/18. The forecast for 2018/19, which ends next week, is a further reduction to about 2.1 million dozen.
However, BDO EconSearch has forecast volumes to recover to 2.2 million dozen in 2020/21 and steadily ramp back up to harvests of in excess of 4 million dozen soon after.

BDO EconSearch Director Julian Morison said some growers were more exposed than others depending on how they had managed their customers.
‘There has been a slight increase in price but it hasn’t anywhere near offset the reduction in volume,’ he said.
‘I would expect volumes really ramp up in 21/22 and it will pretty quickly get back up to that 4 or 5 million dozen level.’

First reported in France in 2008, Pacific Oyster Mortality Syndrome is a disease that causes major production and economic losses in commercial oyster farms. It has since been detected in Pacific Oysters in the UK, Ireland, the Netherlands, Spain, Italy, Asia and New Zealand.
Before the spat shortage, South Australia was the nation’s largest Pacific Oyster growing state ahead of Tasmania and New South Wales. Unlike the other two states, South Australia has never had a POMS outbreak on a commercial oyster lease.
In response to the South Australian closure in 2016, two of Tasmania’s largest spat producers, Cameron of Tasmania and Shellfish Culture, established hatcheries on the Eyre Peninsula in 2017.
The only two existing small spat producers in the state ramped up their production and PIRSA’s research division SARDI also produced more than 100 million spat for the industry in 2017 and 2018.
These included the development of POMS resistant strains, which are expected to help keep South Australia POMS free in the future. The South Australian Government this week announced a further $750,000 in funding over three years to continue developing POMS resistant strains.
South Australia’s ramped up spat industry has now reached full production. However, the early spat it produced was sent out to oyster leases when it was just 2mm in size, adding an additional 6-12 months to maturation times compared with the 4-5mm spat traditionally sold.
South Australian Oyster Growers Association Executive Officer Trudy McGowan said although growers were doing it tough, there was ‘light at the end of the tunnel.’

She said the waiving of lease and licensing fees this year and next year by the state government and access to drought relief programs had helped ease the burden for growers.
‘It’s a really difficult situation for them and in a lot of ways this year will be the most difficult for a lot of our growers because even though they’ve been able to get all the spat they need, their sites had been empty previously so they are not getting as much money coming in through the sale of oysters,’ Trudy McGowan said.
‘But I think people are quietly confident because they’ve got oysters back in the water and they are watching them grow. Having the hatcheries in South Australia now and the fact that we’re the only POMS free state means our guys can not only supply South Australia but can also export to the other areas and that gives us a real opportunity going forward to be the oyster growing capital of Australia.’
Within time, the revamped industry will allow the POMS resistant spat produced in South Australia to be exported to oyster farms interstate and overseas to growing regions such as North America.
Unlike many other growing regions where leases are situated in estuaries, South Australian Pacific Oysters are grown in bays and gulfs resulting in a fresh ocean taste that is popular with Asian consumers.
‘Ours have that distinct salty flavour and that seems to be very well liked in the Asian markets so going forward that’s a real advantage for us and we see it as a popular point of difference,’ she said.
‘We had a 5 to 10% export market before the shortage into Hong Kong and other parts of Asia so once the quantities come back that will continue and I see it as an opportunity for it to really grow.’
She said the lack of availability and price increases had led to oysters dropping off restaurant menus in the eastern states, which is a major market for South Australian oysters, adding that her association would assess increasing stock levels in the second half of the year ahead of a campaign timed with a return to full supply.
‘As soon as we’re sensing the time is right we’ll definitely be out there telling the consumers and the restaurants that we’re back.’
Colleen and Jeff Holmes have run SA Premium Oysters at Smoky Bay since 1989.
Their 5ha of leases were only stocked with a 50 per cent spat allocation in 2017 and 2018 but returned to 100 per cent in January this year.
The tough times have forced their son Wayne to find work elsewhere and have also prompted them to start taking tourists out to their leases for tasting experiences.
Colleen said they had just started harvesting the first season of oysters grown from their reduced spat allocation and many growers faced a similar season.
‘We’ve probably been in decline for the last eight months and we’re now at that 50% so we’re down to supplying one customer only plus our tours,’ she said.
‘All farms have droughts in various ways and this is how ours is – you budget to what you have. I wouldn’t like to see prices go up, we’ll price ourselves out of the market if it goes too high and at the moment we are an affordable luxury.’