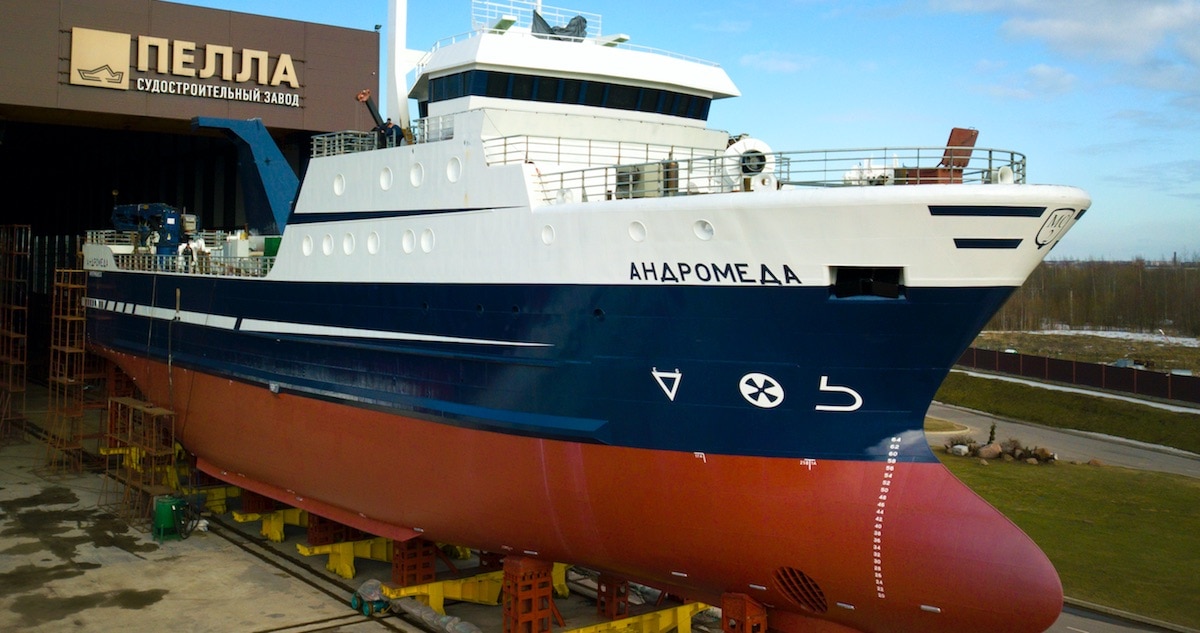 Andromeda has been moved out of the Pella yard’s construction hall ahead of next week’s launch. Image: Pella Shipyard

The first in a series of four 70 metre factory trawlers being built by the Leningrad Pella Shipyard has been shifted out of the construction hall ahead of its launch next week.

Andromeda is being built for Murmanseld 2, the first of a series of four Cramaco-designed factory trawlers for the company, and due to be followed by sister vessels Castor, Pollux and Alhena. Andromeda’s keel was laid at the yard in September 2017 and the completed trawler is to be delivered before the end of this year.
The formal launch of the new trawler will take place at the yard next week. The other three in the series are at varying stages of construction.
The four trawlers are designed to have a 70 metre overall length and a 13.50 metre beam, to be powered by a 5220kW Wärtsilä 9L32 main engine and to have accommodation for up to 60 persons on board.
Total freezing capacity is expected to be approximately 100 tonnes per day in a combination of horizontal and vertical plate freezers. Planned fillet production on board should be 20 tonnes per day, in addition to processing routes for H&G fish, minced fish, fish oil and fish meal.
The trawlers will each have 1400 cubic metre fishroom and a 230 cubic metre meal store.
In addition to the Cramaco design, a number of Norwegian companies are involved in supplying Murmanseld 2’s four new trawlers, including refrigeration systems from MMC Refrigeration and deck equipment from Rapp Marine.

Kvannøy does well on blue whiting