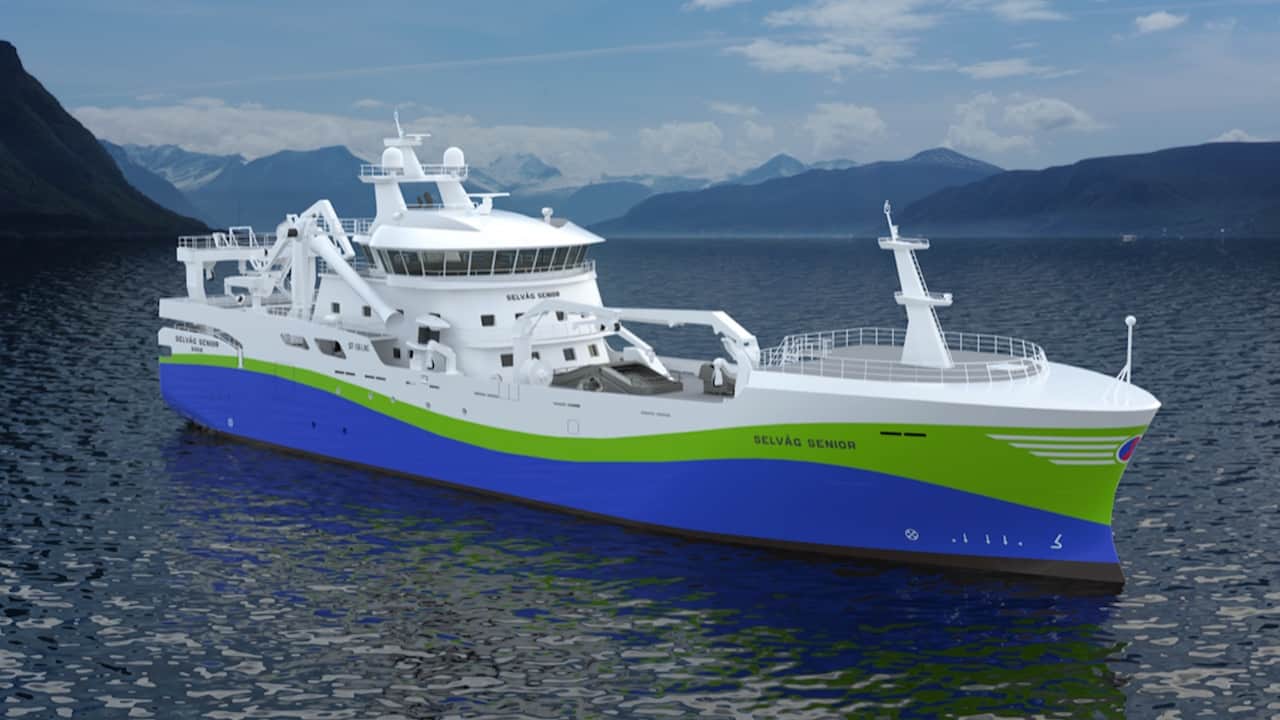 Norwegian fishing company Selvåg Senior AS is going ahead with the construction of a new pelagic vessel which will be packed with innovative environmental technology.

The new 79.50 metre by 16.20 metre breadth Selvåg Senior will be built to a Skipsteknisk ST-136 LNG design, and this isn’t the first collaboration between owner and designer – although there are few similarities between the current vessel and its replacement.

The new design has been developed over a long period, and incorporates capacity for LNG storage, which will be Selvåg Senior’s primary energy source. A vertical gas tank with a volume of as much as 350 cubic metres is to be built into the forward section – an area that often presents a designer with challenges in terms of fully utilising space available. According to Skipsteknisk, this option offers excellent use of space, affecting the vessel’s dimensions less than if a conventional horizontal tank arrangement had been chosen.

As liquefied natural gas has to be stored at a temperature of approximately -160°C, it needs to be heated to ambient temperature before becomes a gas and can be routed to the main engine. A sophisticated management system utilises excess heat energy from this process to power the RSW system, while excess exhaust heat is recovered and converted to electrical power, all of which makes Selvåg Senior the first fishing vessel in the world to be fitted with this type of technology which ensure minimal energy wastage.

The LNG installation is backed up by a 1mW/hour battery pack, which will replace many of the usual functions of diesel gensets, while also flattening the main engine’s energy requirement curve, plus providing power in dock. Selvåg Senior is also designed to be linked to a climate neutral shore supply when in port to charge the battery pack.

The ship’s electrical platform is based on a DC-grid arrangement that provides full flexibility in utilising the main engine over its entire speed range. It can most easily be described as an automatic and more efficient handling of the ship’s changing operating pattern and this will also have major impacts on propeller optimisation.

All these measures will lead to a reduction in emissions on a scale that is new to the fishing industry, reducing emissions of greenhouse gases by an estimated 42% compared to a similar new vessel built with conventional technology.

The new Selvåg Senior will be rigged for purse seining and pelagic trawling, with options to pump at the stern and over the side.

All the pumps and winch systems will be electric, with capacity to re-route energy to the battery pack.

Selvåg Senior is designed to have a 2500 cubic metre capacity in 12 RSW tanks. The owners of Selvåg Senior and Skipstenkisk have been involved in a number of extensive collaborative efforts with research body SINTEF to achieve optimum cooling and circulation in the RSW tanks.

‘We greatly appreciate the co-operation with owners for a number of years,’ a Skipsteknisk spokesman commented.

‘The active involvement of Selvåg Senior AS has been crucial to the entire development process that now lies behind the new building. We look forward to following the construction process together with shipowners, shipyards and suppliers.’