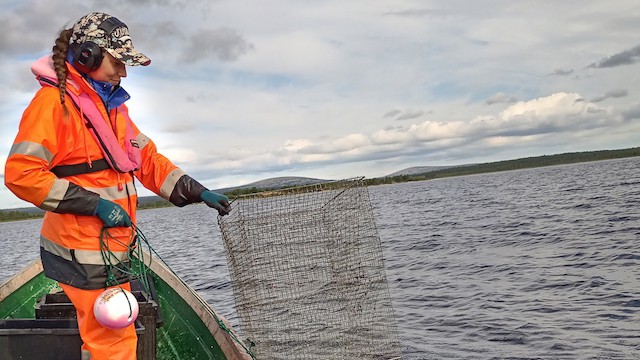 Passing on expertise to a new generation

The Lapland FLAG has financed a fisheries recruitment and training project to rejuvenate the ageing fisheries sector in the area around the Lokka and Porttipahta reservoirs, bringing fourteen young fishers of both genders into the fishery.

Like many other fishing communities across the globe, the Lokka-Porttipahta reserve in northern Finland has been struggling with the progressive ageing of its population. To stem, and to reverse, this trend, in 2016 the municipality of Sodankylä applied for a grant from the Lapland FLAG to analyse the potential to attract new fishers.

The results clearly indicate that new fishers should be actively recruited in order for the fishing community to continue thriving. Recruiting new people to the industry is also necessary for maintaining the supply of local fish for the municipality’s catering services and for the Southern Finland market, where most of the catch from Lokka and Porttipahta is sold.

A year later, the municipality of Sodankylä and the Lokka Fishermen’s Cooperative started a new FLAG project to implement this recruitment. They launched a national communication and media campaign to promote the professional opportunities linked to fishing in Lokka-Porttipahta, as well as information sessions about the recruitment process at fisheries training centres.

The main objectives of the project were to ensure the continuity of the sector in the area, to improve the professional skills of both new and existing fishers, and to develop an innovative fisheries recruitment model for the area.

Following the recruitment process, the new fishers were trained by senior fishermen over a period of two and a half years, following a flexible system that took the apprentices’ work and study schedules into account. The training methodology differed from the traditional master-apprentice approach, as the senior fishers provided training based on their own specific skills, such as catching fish and designing gear or the processing and post-harvesting side of the business.

At the conclusion of the project, fourteen young fishers, including two women, started to work in the area, and the total number of commercial fishers in the reserve has almost doubled.

Thanks to the project, new investment in the port and processing infrastructure (as well as other development funding) has taken place, with even more expected in the area. Also, the new fishers are expected to bring new ideas to develop the local fisheries sector.

Although the project has now finished, the Lokka Fishermen’s Cooperative has decided to carry on under their own steam. Experienced fishermen are committed to providing training for anyone who is genuinely interested in this work. This has increased the importance of the role that the fisheries sector has in developing local economy.

Lessons learned during the project are that the most important element of the project and the recruitment model are the cooperation between fishers, municipality, employment authorities and the FLAG.

According to FarNet, it is essential to use a holistic approach when planning a fisheries recruitment project. Besides attracting new fishers to the area, the project needs to consider their living needs, and the community must be ready to help the newcomers to integrate. Further support should be provided, such as housing assessment, or start-up grants for fishing businesses. This was essential in Sodankylä, as some of the trainees arrived from other parts of the country, so they had to prepare their move to Sodankylä while their training was underway.