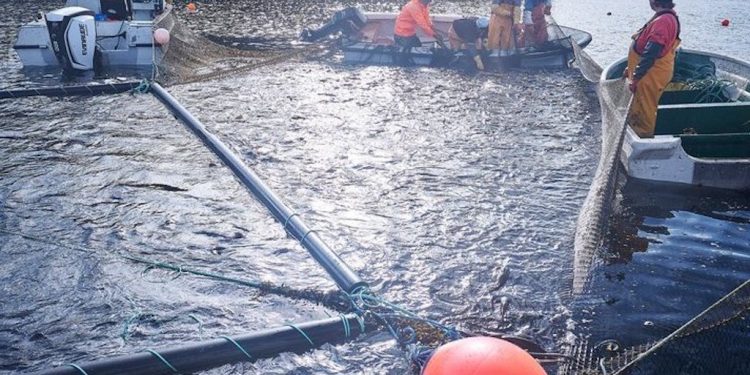 The Nutaaq cod fishery in Greenland, with fish held alive in cages before being transferred to Royal Greenland’s factory in Manitsoq, has kept the coastal fleet active and produced higher production.

According to Royal Greenland’s production director Lars Nielsen, the summer has traditionally been a difficult period, with fluctuating catch quality, but the Nutaaq fishery that was initiated in 2015 has changed this.

‘We have long had problems relating to quality with cod caught in bottom nets, which affects prices on export markets. The challenge for the summer cod fishery is that the quality of the fish is simply lower,’ he said, commenting that this is a result of what the cod feed on through the summer, which results in looser meat quality, which is made worse when the fish is frozen in the usual way.

‘The meat becomes very loose when the consumer thaws it for us,’ he said.

The basis on the Nutaaq fishery is that cod are held in cages for 14 days before being transported to Manitsoq.

‘The fish empty their stomachs while they are in the cages, so the meat has a beautifully firm quality, which is significantly more attractive to buyers on the international market,’ he said, adding that as long as the fish are handled correctly, they are not distressed, and small fish are released alive.

‘Over the years there were hundreds of complaints from customers around the world due to the poor quality of summer cod. That’s why we had to do something,’ Lars Nieslen said.

As a result, the number of complaints has fallen dramatically, while prices have also been better.