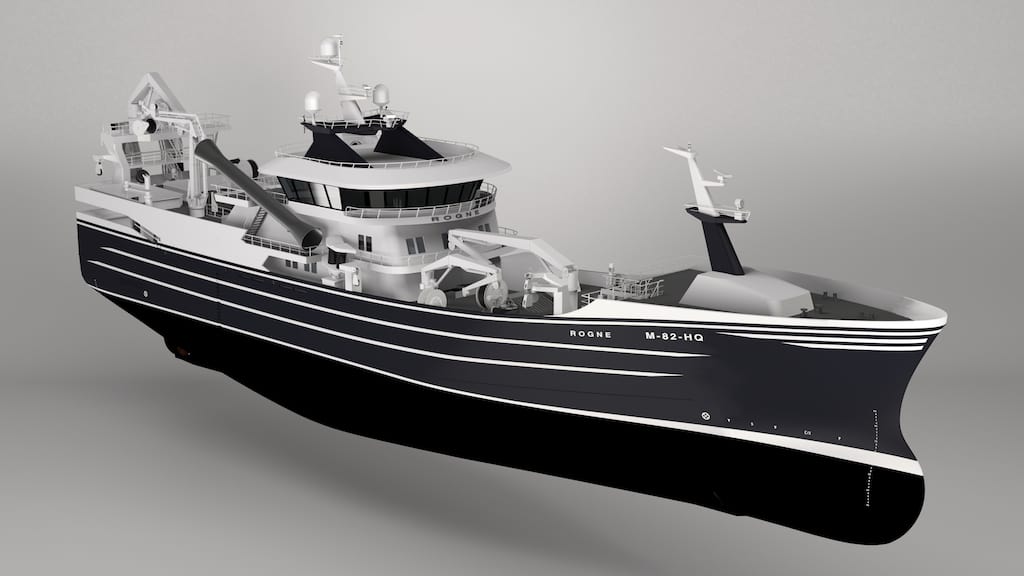 Another Norwegian pelagic operator has opted to build in Denmark. Following the order for a new Hargun announced a few days ago, fishing company Rogne has also contracted the Karstensen yard in Skagen to build a new 83 metre pelagic vessel to replace the current Rogne, built at the same yard in 2013.

According to the yard the company’s experience with the current Rogne made returning to Karstensen an obvious choice.

The new vessel has a projected delivery date of July 2025 and it will operate on primarily as a trawler for blue whiting and is expected to purse seine for mackerel and herring.

Rogne is to be built to the yard’s own design, finalised in collaboration with the customer, and it has the same dimensions and similar equipment choices to the new Hargun, including a twin main engine arrangement with a pair of B33: 45L6P Bergen engines driving a 4500mm propeller with a Brunvoll Volda reduction gear. This layout allows the vessel to operate for the most part with one of the two engines running, switching to both when full power is needed for high-intensity operations.

Rogne’s operating profile has been optimised for the lowest possible fuel consumption, in addition to heat recovery from all engines as well as a number of other measures to ensure minimal energy consumption.

The triple 1100kW RSW system for the 2700 cubic metre tank capacity will be from PTG Frio Nordica and C-Flow will supply the vacuum pump system. The hydraulic deck systems are being ordered from Karmøy Winch.

Safety and working conditions for the crew are at the top of the priority list for Rogne’s owners, who have stipulated that the entire load deck has to be waterproof. The trawl deck aft is raised an entire level, increasing freeboard and making the trawl handling area a safer place to work.

The company was established by Bjarte Rogne in 1965, and he was joined soon afterwards by his brother Marvin Rogne as co-owner. Today the company is managed by Frank, Kjell-Ove and Per-Magne Rogne.