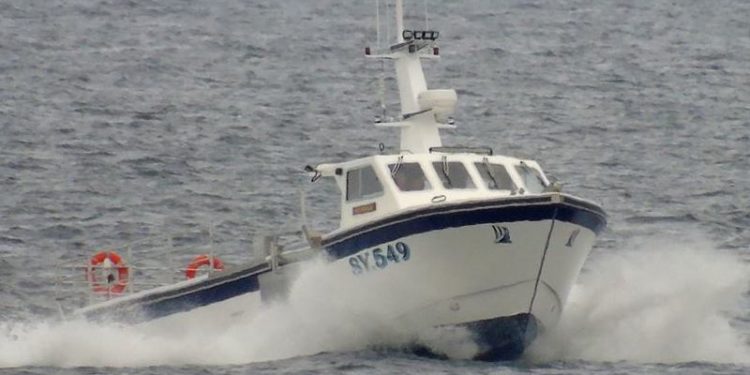 A new Typhoon 38 completed for Donald and Catriona Maclennan in Stornoway has already been steamed home after being completed at the G Smyth yard in Kilkeel. With the crab season still underway, the owners hope to make the most of it with this fast new crabber.

The mould was delivered to the yard in 2017, and while the boat was in the early stages of construction, it changed hands, with new owner Donald Maclennan bringing his own ideas to how he wanted the new Valhalla SY-549 finished and fitted out.

Valhalla has an Iveco FPT Cursor C87 tm62. 11 main engine, supplied by Joe Kirwan of Kirwan Technical Services Ltd, which provides a top speed of 19 knots and a comfortable cruising speed of 12 knots. The stern gear and propeller are supplied by Clements Engineering, with a 29×25 4bl RH hyperform propeller to optimise the boat’s speed. Steering and controls have been supplied by Helmsman systems.

The layout has a forward wheelhouse that leaves plenty of working deck space. The wheelhouse has a small compact galley are fitted out by G Smyth Boats own joinery team in oak veneer and trim, making the most of the small space. A microwave and fridge are fitted in the galley area, and a small removable table has been fitted for food preparation when working longer trips. A second seated area has been created for the other crew with storage wherever is free.

Valhalla’s side has been sheeted around the hauling area to protect the hull from the creels coming aboard and the hauling system and custom bait table are from Solent Engineering.

Sirm UK’s Kilkeel branch supplied Valhalla’s electronics, with a JRC JMA 1034 4kw radar, a Lorenz black box chart plotter, a Hondex HE881 echo sounder, a Koden KGP-913 GPS Navigator and a 2000 class b AIS System. The autopilot is a Navitron NT-777 and the VHF is an ICOM IC -M323 DSC set.

The CCTV system was supplied by Donald Maclennan and fitted into to clearly show the deck from the skipper’s chair to keep crew safe at all times. All of Valhalla’s electrics were completed by Ashley Maginnis.

All steel work, including the rails, cat catcher, derrick and mast have all been crafted by the G Smyth Boats team.