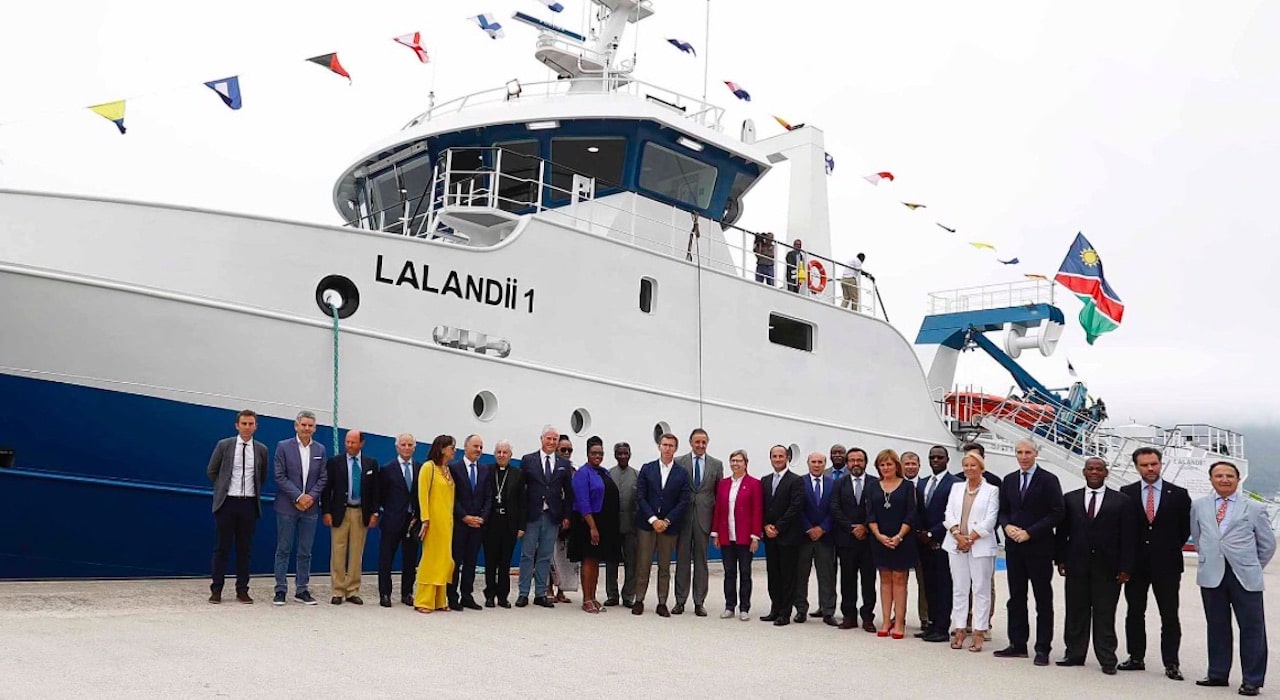 The first of a new generation of trawlers for Spanish fishing company Nueva Pescanova has been handed over by Astilleros Armon’s Vigo shipyard.

Lalandii 1 is a 49,65 metre, 11 metre beam fresher stern trawler with a 1600kW main engine, which will fish primarily for hake, one of three sister vessels operating for Nueva Pescanova’s Namibian subsidiary companies Novanam and Lalandii.

Armon’s Vigo and Burela shipyards will between them also deliver four 32 metre freezer vessels that will fish for shrimp for Nueva Pescanova’s Pescmar subsidiary company in Mozambique.

Nueva Pescanova has put more than €40 million into renewing its fleet with these seven modern vessels designed for efficient and economic operation, and with better working and living conditions for the crews.

Lalandii 1 was christened at a ceremony in Vigo by mayor of Lüderitz Hilaria Mukapuli, whose first job was at Pescanova’s Lüderitz factory.

The event was also attended byAlberto Núñez Feijóo, President of the Xunta de Galicia, mayor of Rodendela Digna Rivas, Rosa Quintana of the regional government’s fisheries ministry and Francisco Conde from the regional government’s ministry of economy and industry, as well as by Juan Ignacio Gandarias, director general of Fisheries and Aquaculture Management oat the Ministry of Agriculture, Fisheries and Food

Speaking at the christening ceremony, Alberto Núñez Feijóo commented that the seven-vessel contract is significant investment and also a major venture, adding that the contract is one of the most important to be made in Spain for a fishing company.

He highlighted the high activity rate of shipbuilding in Galicia, commenting that of 58 new vessel contracts in Spain, 30 are place in Galicia.

‘The christening of the Lalandii 1 represents a milestone for the Group,’ said Nueva Pescanova’s chairman Jacobo González-Robatto.

‘We want to grow with confidence from a solid base. The creation of jobs is of great importance for the company and today we are not only celebrating the delivery of a new vessel but also the confirmation of our commitment to create local employment wherever we operate and to contribute to the economic and social development of the communities where we are present.’