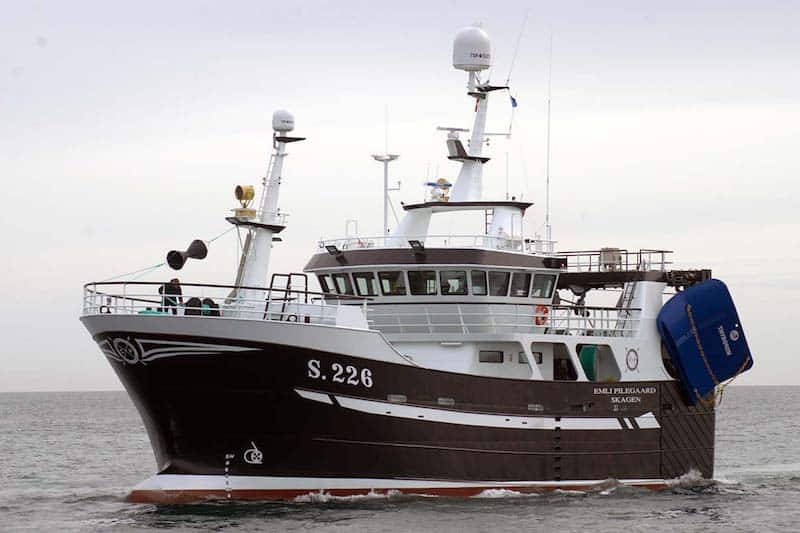 The unusual name of the latest new trawler to join the Skagen fleet isn’t a spelling mistake – but all the same, it has called for more than a few explanations from skipper and owner Christian Pilegaard.

His old boat, which was handed over in February to new owner Thomas Christensen, was Emmely Pilegaard after his eldest daughter, but with a new boat on the way, her sister wasn’t inclined to be left out, so the new boat’s name is drawn from their two names, Emmely and Lilly, to make Em-Li, hence Emli Pilegaard.

The new boat’s construction hasn’t been an entirely easy ride. It was designed by Vestværft and the hull was commissioned from a yard in Riga. But with a shortage of labour, the half-completed hull was towed to Gdynia in Poland to be finished, before being brought to Thyborøn to be fully fitted out with Thyborøn Skibs & Motor as the main contractor.

The problems with the hull construction resulted in a delay of around six months, but once the steelwork has arrived in Thyborøn, work on the 28 metre overall, 8.40 metre beam shrimper with accommodation for a crew of six progressed rapidly, with both the main contractor and sub-contractors making efforts to get the build back to schedule – and came close to getting the Emli Pilegaard delivered on the original completion date.

As well as acting as the newbuild’s main contractor, Thyborøn Skibs & Motor also supplied the hydraulic deck equipment, with three 18 tonne trawl winches with a Thyborøn trawl computer, single and double net drums, several smaller winches and an anchor windlass, and a hydraulic system for positioning the three towing blocks. The discharging crane is a TMP 900.

Designed to concentrate on shrimp, Emli Pilegaard has an Intech International factory on board that breaks some new ground in terms of cooking and processing speed. The factory deck is highly automated and the process has been improved and speeded up as the cooling time for the cooked shrimp has been approximately halved to only half an hour. Lemvig Maskin og Køleteknik supplied the refrigeration system and ice machine.

According to Christian Pilegaard, this has implications for both time saving and quality, which he expects to be reflected in better prices for his catches – and better earnings for the crew who alternate a two-week trip at sea, followed by the next trip ashore.

He added that the space the factory has been fitted in is a big improvement, making cleaning easier and more effective, while providing a better working environment for the crew.

In addition to optimised processing, the catching side has also been refined with selective trawl gear supplied by Selstad Nordtrawl with sorting grids to exclude by-catches. Selstad Nordtrawl’s Skagen net loft supplied three complete shrimp trawls and the doors and clump are from Thyrborøn Trawldoor. The twin-rig setup achieves a spread of 160 metres between the doors, and the gear performance can be monitored from the wheelhouse via the Scanmar sensor setup to maintain optimum configuration.

Electronics were supplied by TSR Electronic, with a mainly Furuno setup including FAR-2117 radar, SC-70 and SC-30 satellite compasses. The DFF1-UHD Chirp echo sounder is also from Furuno, and this is alongside the WASSP system that includes side-scan and ground hardness modules with a 3D module linked to the MaxSea plotters. Fishing gear sensors are from Scanmar.