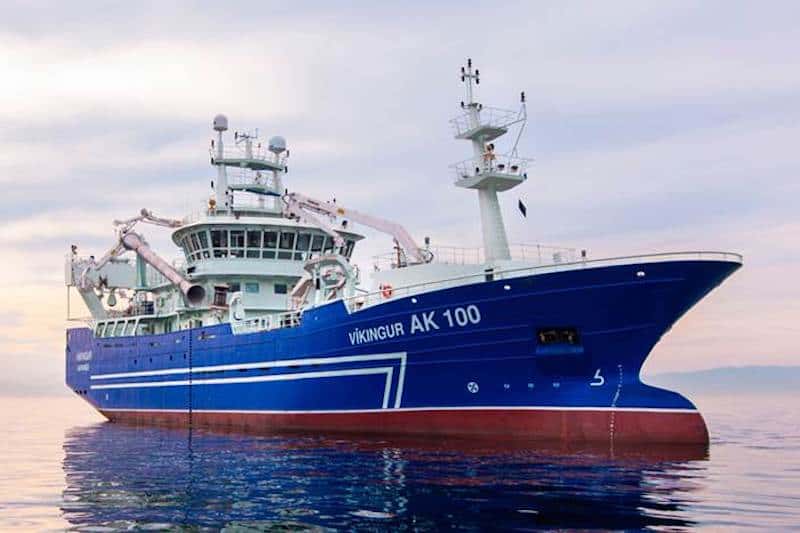 HB Grandi’s pelagic vessel Víkingur is steaming home with 2200 tonnes of blue whiting in its tanks after a trip in Faroese waters, and fishing has slowed down in the last few days as the fish are increasingly dispersed.

‘The blue whiting are more dispersed and you need to tow for a long time to get a decent haul. We have 2200 tonnes and we’re scheduled to be in port at Vopnafjörður early tomorrow morning,’ said Albert Sveinsson, skipper of HB Grandi’s pelagic vessel Víkingur, which left the blue whiting grounds yesterday evening with a course set for Vopnafjörður.

He said that most of the pelagic vessels are now fishing in the area south-west of the Faroes.

‘The very strong currents in this area take you by surprise and they are probably due to the deep ledges here. Sometimes you hardly need to be moving for the trawl to stay open and if you tow across the tide there’s the risk that the gear will fold over on itself. We started fishing in bad weather, and once it improved it has been mostly fine since. It looks to me like it won’t be a pleasant place to be at the weekend with a deep depression on the way,’ Albert Sveinsson said.

He commented that fishing has been mainly at 140 to 220 fathoms. The blue whiting rise to shallower depths in the evening and during the night and are more dispersed than during the day.

‘As things are at the moment we have been towing for around 20 hours for hauls of 300 to 350 tonnes. The blue whiting are pretty dispersed and if anyone finds a patch where the fish are tighter, then the others are quick to get to the same area,’ Albert Sveinsson said.