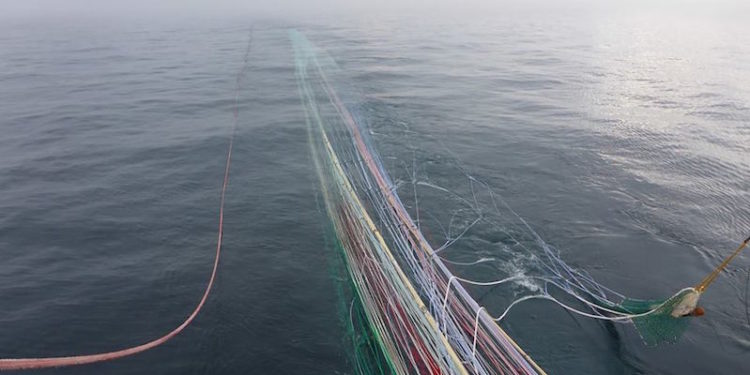 Killybegs fishing gear manufacturer Swan Net Gundry (SNG) continues to reinforce its reputation as one of the world’s leading designers of all types of trawl gear with this year’s upgraded production of the Helix trawl for pelagic fisheries, and of innovative new prawn and whitefish gear.

The 1280m trawl design, which has already seen excellent results for pelagic vessels in Ireland, Scotland and Shetland incorporates the well-known L&R lay Helix ropes for high-powered pelagic vessels as these vessels need for the flexibility of a stretch factor under heavy loads, while retaining the ability to return to its original shape and form.

With a recorded opening for single and pair trawl pelagic gear of as much as 78 fathoms horizontally and 34 fathoms in vertical opening, the design now incorporates the new Helix ropes in the top and sides and are constructed with strengthened heavy wearing three-strand rope on the bottom insert with the added benefit of colour coding on the bottom wings.

Orders have been placed in Scotland for the 1280m Helix trawls by the owners of the Quantas and also for the new 78m Kings Cross which is due to arrive to Scotland later this month.

For the Quantas, Ian, Mark and Stewart Buchan ordered the new 1280 Helix net with more small mesh in the back-end for the mackerel and herring fisheries.

The new concept in design features SNG’s new Helix twine in the front end of the trawl and incorporates an 8-panel section on the back-end of the trawl which, according to feedback from SNG customers, stays open longer when the volume of fish enters the brailer.

For Kings Cross, Alex and Adam Wiseman and William Buchan decided to go for a 1280 Helix mackerel trawl and, according to reports, this particular model provides net readings comparable to a conventional net with a 1434 metre fishing circle.

Also with the 8-panel section on the back-end, the Helix twine in this trawl is colour coded and the four eye points on the meshes are joined with a DynIce lock which gives greater mesh openings in comparison to the conventional knotted meshes.

Chris Duncan, skipper of the Altaire, has gone for a repeat order for the custom-built 1638 net with a 43.50 fathom brailer and has also ordered 4 x 55 fathoms DynIce Dux bridles.

Skipper Gary Williamson of the Research has ordered a new Helix herring trawl and a new 8-panelled mackerel brailer. The 8-panelled brailer provides greater opening at the middle splitter and, based on feedback from SNG customers who have already used this new design, the fish landed is of good quality. Research will spread this new Helix herring trawl with a new set of 15 square metre Thyborøn trawl doors.

Skippers Allister Irvine and Johnny Simpson of the Zephyr has yet again ordered a Helix trawl with the new 8-panelled brailer.