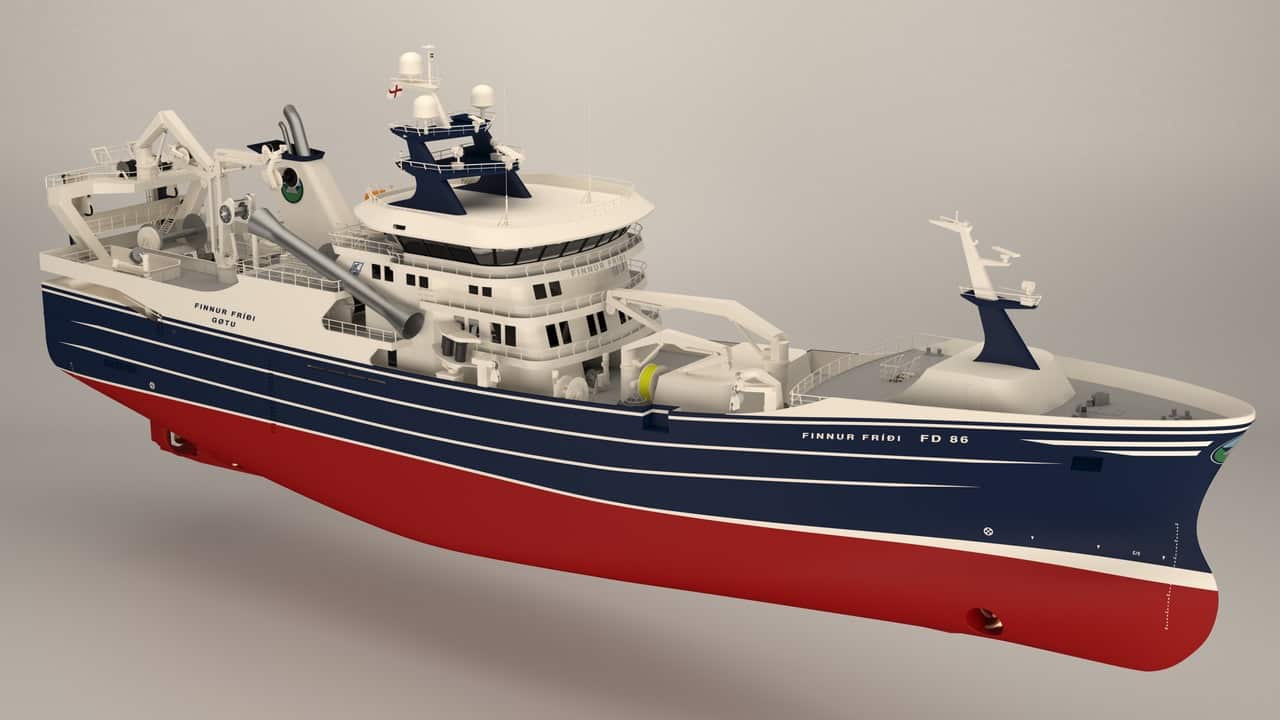 Faroese fishing company Krossbrekka, part of the Varðin Group, has placed an order with Karstensens Skibsværft for a new 88 metre pelagic trawler/purse seiner to be delivered in January 2024, replacing the current Finnur Friði. Valued at DKK340 million, this is the yard’s most valuable fishing vessel contract to date.

The design and layout have been developed in a collaborative process between the yard and customer, concentrating on optimised systems and working conditions for the safety and comfort of the crew.

A great deal of effort has gone into evaluating propulsion systems and every possible configuration has been examined before the final concept was decided, which includes a 1479kW Brunvoll submersible combi-thruster, as well as Brunvoll side thrusters.

The vessel concept as a whole has been developed based on the required operating profile, and the owner’s stated intention to operate sustainably with minimal Nox and CO2 emissions per kilo of catch, operating on fisheries for herring, mackerel, blue whiting and capelin.

The hull of the new Finnur Friði will be built at Karstensen Shipyard Poland, and the completed vessel will be delivered in January 2024.

On-board systems have yet to be confirmed, but these include a triple 1100 kW + 80 kW RSW arrangement.

Fishing company Varðin was established in 1985 and its first new vessel, Tróndur í Gøtu, was delivered the following year. After a tough start, the company has grown steadily and today operates Tróndur í Gøtu, Gøtunes and Tummas T, as well as the current Finnur Friði which was built in 2003 and has been a top catcher in the Faroes, skippered by Árni Hansen, in recent years with the skipper’s role shared with others.

The present Tróndur í Gøtu is the second to carry that name and was built by Karstensen in 2010.

Varðin also runs a pelagic processing plant on Sudurøy and has involvement in a number of fishing operations, including pair trawler operator Faroe Origin.