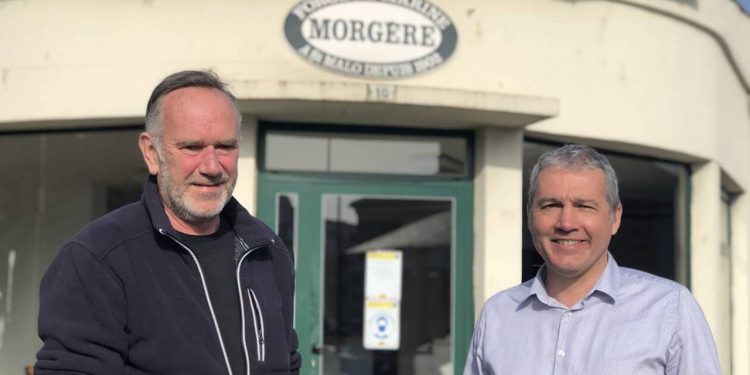 As Michel Dagorn, who has managed Saint Malo fishing gear company Morgère for the last decade is set to retire last this year, the company is set for some big changes.

As Michel steps down in the autumn, he will be succeeded by new managing director Pascal Reverseau, who brings both a technical and a commercial background with him to this new position, which he comes to from a role as president of Safran Landing Systems Services at Dinard-Pleurtuit airport, which specialises in the maintenance of landing gear and hydraulic equipment.

He trained in mechanical engineering and also has a business qualification.

Pascal Reverseau and Michel Dagorn are currently working together until Michel’s retirement at the end of the year. He joined Morgère in 2009 after a 25-year fishing career.

‘It has been a wonderful to work at Morgère and I am delighted that Pascal Reverseau will be taking charge once I retire, as he brings with him much experience and the determination to grow the business,’ he said.

This summer will also see Morgère relocate from the workshops it has occupied for a century on the quayside at Saint Malo to a new custom-built production facility around twenty minutes away in Miniac-Morvan.

This new 2500 square metre unit is expected to be operational in August and represents a €3 million investment, bringing in the latest manufacturing systems, as well as better storage capacity and more efficient handling.

‘Innovation and new product development are at the heart of the Morgère operation, and the new production facility will provide the company with a platform for new growth,’ Michel Dagorn said.

Incoming managing director Pascal Reverseau said that despite the current challenges of the Covid-19 pandemic and Brexit, the company is optimistic for the future, and will look to diversify into other sectors, including ship repair.

‘I wanted to embark on a new challenge with a company that would provide the opportunity to use my skills and knowledge to enable development and diversification,’ he said, adding that in particular, he appreciates the autonomy he will be given by the directors of Morgère’s parent company, Marc Group.