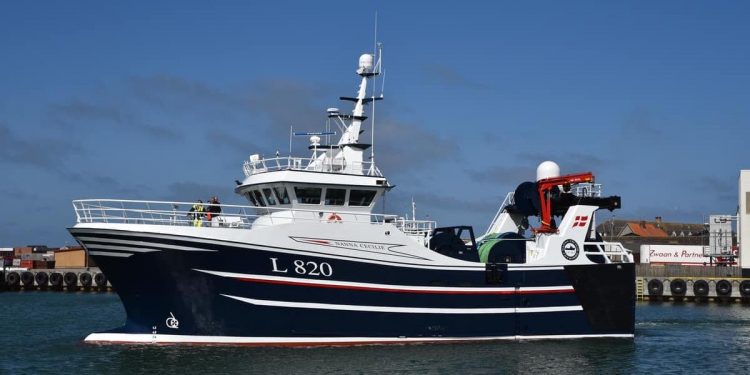 Despite the pandemic and lockdown that paralysed much of Denmark’s economic activity earlier this year, Thyborøn Skibs & Motor have the new Nanna Cecilie ready in May for local fishermen Hans Jørgen Jensen and Jens Peter Langer.

While the new fly-shooter/trawler has been fishing successfully since its launch, there was no option but to postpone the christening ceremony for the new vessel, which is planned for some time in November, depending on the Covid-19 situation at the time.

The contract for the Vestværft-designed Nanna Cecilie was signed at the end of December 2018, with 3XJ as the main contractor, and with three months fishing behind them, the owners are satisfied with what they have, and there have been no major problems.

‘Of course there are minor adjustments, which is normal with a brand new boat. On the whole, we are very satisfied with the result, both in terms of safety and comfort on board, and everything just works really well,’ Hans Jørgen Jensen said.

Outfitted for both flyshooting and trawling, and since starting fishing in mid-May, Nanna Cecilie has been fly-shooting primarily in the Norwegian sector for cod, hake, haddock and saithe. They have also acquired quotas for the North Sea and Skagerak, as well as the Baltic, providing them with opportunities over a wide area, both for coastal fishing and for longer trips. When fishing further from home, there has been a pattern of double trips in Shetland waters, with one landing in Karmøy in Norway before heading home to land at the end of a second trip. The plan is to switch over to trawl gear for the winter.

Recently Nanna Cecilie has been fishing short trips close to home, landing mixed fish that includes squid, which has fetched respectable prices at auction – allowing them to hold the northern quotas in reserve while prices have not been at their best.

Right now Nanna Cecilie is back on northern fishing grounds around Shetland, as the weather along the Danish coast has been erratic.

Hans Jørgen Jensen commented that there are hopes that the Brexit situation can be resolved so that access to these fishing grounds will not be restricted – otherwise the result could be a concentration of the Danish fleet’s fishing effort elsewhere.

The hull of the 27.55 metre LOA, 8 metre breadth Nanna Cecilie was built at PTS in Poland and completed by Thyborøn Skibs & Motor, which also supplied the hydraulics and deck machinery, with a pair of main winches and a single mid-wire winch, controlled by an autotrawl with a variety of modes for both trawling and fly-shooting. The package also includes twin split net drums and auxiliary winches. The deck crane is a TMP900L.

Once the fly-shooting season is over and Nanna Cecilie switches over to towing its 550# combi trawl gear from Egersund, with three trawls on board. The is a 500 metre length of 22mm Dyneema warp supplied by DK Trawl/Strandby Net on each of the trawl winch drums.

Catches are stored in the 180 cubic metre fishroom, with the chiller system and the twin 4.5 tonne icemakers supplied by Lemvig Maskin & Køleteknik ApS. Nanna Cecilie has a 15,000 litre fresh water capacity for the icemakers, in addition to the 12,000 litre domestic water tank capacity.

Bunker capacity is for 38,00 litres of fuel and accommodation is for a crew of seven.

Nanna Cecilie’s main engine is a 1050hp Caterpillar 3508C driving Hundested Propeller stern gear, with a CPGD120 gearbox with two PTOs driving a 2780mm variable pitch propeller inside a nozzle, via an 11.93:1 reduction ratio. Seamech supplied the engine and pitch control system. The genset on board is a 150kW C 7.1 Caterpillar. 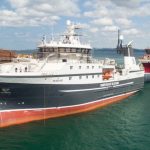 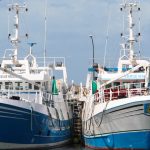 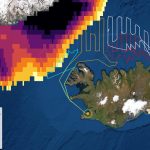 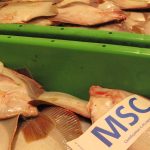 Fish firmly on the Danish menu