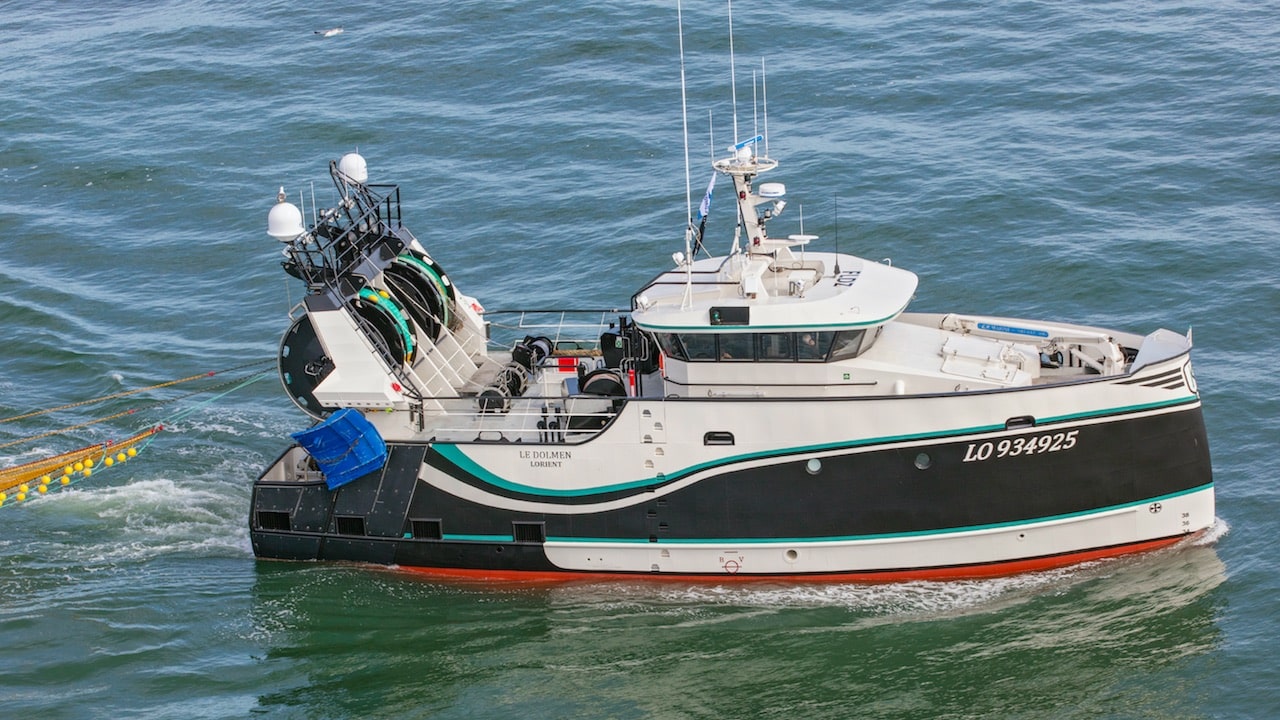 The second of a pair of multi-purpose fishing vessels, designed to be able to alternate demersal, pelagic and pair trawling with seine netting, has been delivered to fishing company APAK, based at Lorient in Brittany.

The first of the Padmos-built pair, Marie-Lou, was delivered earlier this year and is followed closely by Le Dolmen, replacing an older vessel of the same name.
APAK’s trawlers work on demersal species in the Bay of Biscay and the Channel for much of the year, and also switch to pair trawling for tuna for much of the summer. The move to add seine netting to the company’s toolbox began several years ago with the acquisition of Boulogne trawler Gloire à Marie III, which was refitted as a seine netter at Padmos and renamed Naoned, since when it has been fishing well. The success of Naoned’s conversion prompted APAK to go back to the Stellendam yard for the pair of new trawlers.
Le Dolmen has an overall length of 21.90 metres with a 7.80 metre beam, and the design has a slightly inverted bow designed to optimise seakeeping and performance, as well as making best use of the space within the foreship area.
The catch handling deck on board have been fitted out by VCU, and the arrangement on board is also optimised for handling tuna.
Marie-Lou and Le Dolmen each have a 440kW Mitsubishi S6R2-MPTAW-3M main engine turning a 2500mm diameter variable pitch propeller. Each also has a Mitsubishi S4KT auxiliary engine.
As well as the design work, outfitting and supplying the Mitsubishi engines, the Padmos yard also supplied the deck equipment, with a pair of fly-shooting winches aft at main deck level with capacity for 3000 metres of seine rope, and a pair of fishing winches mounted on the shelterdeck, each capable of holding 1000 metres of warp.
The four net drums are mounted in the sturdy gantry over the aft working deck, with two 5.50 and two 4.50 cubic metre net drums, allowing Marie-Lou and Le Dolmen to carry a variety of gear on board. Deck cranes are 600kg/8m units from EK Marine.
Fishing gear has been supplied by the Coopérative de Lorient and the Coopérative de Loctudy, as well as by Naberan in Le Guilvinec, who supplied the demersal and pelagic trawls, and trawl doors are from Thyborøn Trawldoor.
The company is managed by Éric Guygniec, who stepped ashore after a long career as a skipper to run the growing company. He said that Armament APAK now employs 42 crew and a mechanic, net rigger and secretary ashore, while the structure of the company has also expanded with a number of joint projects. Seiner/trawler Naoned is owned under the SCAPAK partnership with Scapêche holding 20% of the ownership, and the same partnership also owns Le Dolmen. Menawenn and Marie-Lou are under a similar partnership with Vives-Eaux, which has a 20% stake.
The main change in the way the APAK fleet operates is the inclusion of fly-shooting into the range of fishing methods, and Naoned was the first vessel in Lorient to adopt this method.
‘Fly-shooting consumes less fuel, and that’s one of the reasons for this,’ Éric Guygniec said.
‘Also, the fish are caught alive and are much higher quality. So if we reduce costs by 20% and increase value by 10-20%, then things add up quickly! For example, trawl-caught hake fetches €2.50/kg and seine-caught hake has been selling for €3.60/kg.’
A lot of preparation went into gearing up for fly-shooting before making a start with Naoned more than a year ago, and this is why Éric Guygniec believes it worked for them from day one.
‘We talked a lot to our colleagues in Les Sabes d’Olonne and we have adapted this to our fishing areas and target species. It’s a method we can use all year round, but it’s not suitable for heavy weather. It’s important to be versatile, able to alternate fly-shooting with pelagic and demersal trawling. The new boats can be equipped for any two methods and so they can switch from one species or method to another without having to return to port.’

Downsizing due to diktats