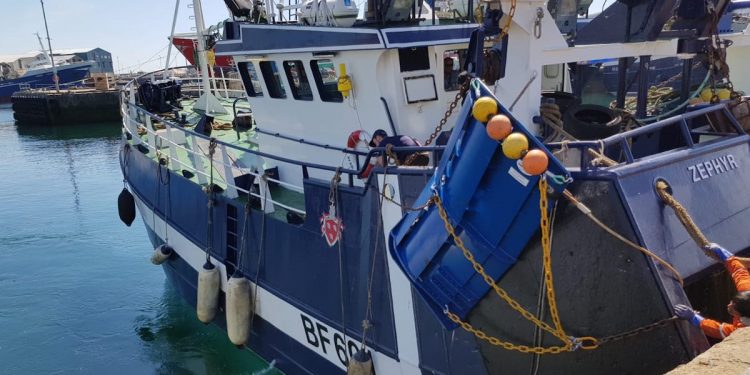 Mark Robertson doesn’t make a habit of believing everything he hears until he’s seen the evidence with his own eyes, but he’s satisfied that his Thyborøn Type 14VF doors do exactly what’s expected of them.

Trawlers Zenith and Zephyr normally target prawns, but with the market struggling following the drop in demand due to the Covid-19 pandemic, Mark and his sons Paul and Adam, who share the two wheelhouses along with Jake Bellamy, decided to switch to flatfish.

Looking to spread their twin-rig gear effectively in shallow water, they switched their usual 66-inch Type 11 Thyborøn doors for a couple of pairs of 2.75 square metre Type 14VF doors.

‘Plaice fishing is generally in shallow water, and we were looking to achieve a 100 fathom spread with long sweeps,’ Mark Robertson said after Zephyr and Zenith had been using these doors for almost two months.

‘I’ve been in this job a long time and I don’t believe anything until I’ve seen it for myself. They said we’d have better spread and less drag,’ he said, adding that he has heard sales pitches in the past and prefers to be sceptical until he sees the evidence for himself.

‘But it’s true. We have more spread and lower drag. These doors do exactly what Henrik at Thyborøn said they’d do.’

The high-aspect Type 14VF are giving the two trawlers more spread for their gear in shallower water, and allowing them to work with less warp out than usual, while also being more stable than Mark Robertson had expected.

‘In shallow water we normally have to shoot more warp to get the spread, but now we’re closer to the recommended 2.5 to 3 times the depth – instead of having to shoot an extra mark of wire to spread the gear,’ he said.

‘With more wire out, the doors are less stable and you’re restricted to towing along tramlines. A 180° turn would take you all day. I had thought there might be problems with the stability of the doors going deeper, but they are stable and quite controllable.’

Zephyr and Zenith each have a pair of prawn trawls on board, as well as their pairs of flatfish gear, and are now alternating a few days at a time on prawns and flatfish.

‘After the prawn market dropped away we went to flatfish. Then we got back a small market for prawns and they are doing a few days at a time on each, landing in Fraserburgh when it’s prawns and in Peterhead when it’s more fish.’

The Type 14VF doors have also been used with the prawn gear, with solid results.

‘I’m impressed with how they work on prawns. They fish very well and are stable – and we have definitely seen a reduction in fuel. We used to burn around 12,500 litres for a seven day trip, but now it’s closer to 11,000 litres,’ he said, commenting that as fishing for prawns and flatfish are very different jobs, having doors that work on both fisheries is ideal.

‘They’ve work very successfully and we’re very happy with these doors,’ Mark Robertson said. ‘We’re not seeing any instability, and I wish I’d got these doors years ago.’