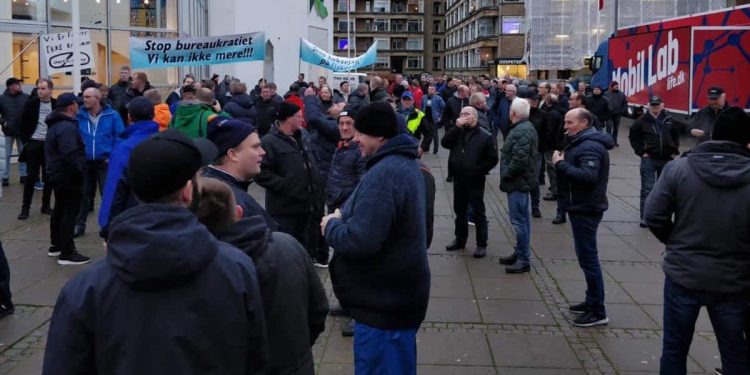 Minister urged to listen to industry

Danish minister of fisheries Mogens Jensen faced a less than friendly gathering dissatisfied fishermen during yesterday’s protest in Aalborg, where he did his best to defend the government’s position.

He commented that discards are just one of the things affecting fish stocks, as climate change, pollution and predators such as seals and cormorants also play a part – factors that the Minister said that he had pointed out to other EU ministers at last year’s December Council.

Contrary to the claims the industry has made, he stated that there has been consultation with the industry on changes to regulation – a statement that was met with a resounding negative response from the assembled fishermen, indicating that there is a clear discrepancy between the Ministry’s perception of consultation and the industry’s.

‘We can only fish for any surplus there is,’ he stressed, arguing that the state of stocks is not the fault of fishermen, but the industry has to be involved in managing fish stocks.

Responding to the Minister, Danish Fishermen’s Association chairman Svend-Erik Andersen took the opportunity too thank the Minister for attending the meeting, but advised that he needs to think carefully before carrying out experiments with an entire profession, especially at a time when significant challenges are being faced, by reduced quotas, the uncertainty of Brexit and on top of that, being burdened by regulation on top of regulation.

‘Look around,’ he told the Minister. ‘These people may seem brusque, but they are nervous and worried. Some of them have already reached the conclusion that they have to leave the industry. We are at a critical point,’ he said.

He commented that Denmark is the only EU nation expecting to monitor activity at sea around the clock, and that camera surveillance demonstrates an unpalatable suspicion of Danish fishing.

‘This only helps to further damage the reputation and reputation of Danish fisheries in the EU if it’s necessary to rush through camera surveillance before any agreement has been reached within the EU on how appropriate a part of fisheries control this is,’ he said.

He added that since the December Council last year, there have been numerous explanations of why camera surveillance is seen to be necessary, and suggested that if the Minister has a problem within government, then a dialogue with the industry about specific problems that need solutions.

‘Camera surveillance in the Kattegat does not generate more cod. Instead you get fewer vessels in fishing, fewer active ports and fewer jobs,’ Svend-Erik Andersen said.

‘I would urge the Minister to listen carefully to what is said at today’s meeting. You are the Minister of Fisheries and one of your most important tasks should be to be in dialogue with the profession for which you are responsible.’