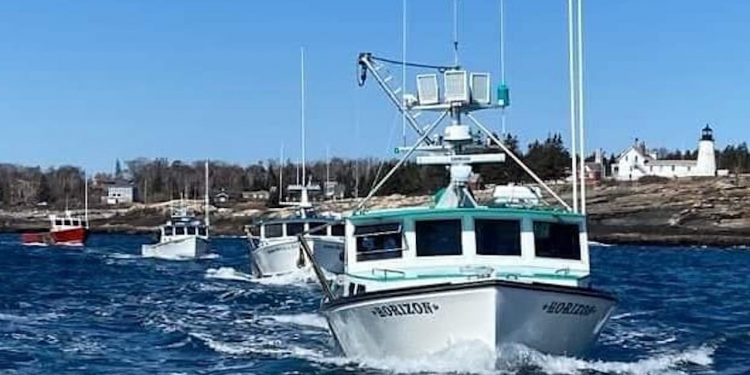 This weekend a fleet of a hundred fishing boats gathered close to Monhegan off the coast of Maine to protest against plans to develop offshore wind in the Gulf of Maine.

The Maine Coast Fishermen’s Association is increasingly concerned about the rushed siting process of offshore energy development facilities on our wild oceans and argues that as the Gulf of Maine is one of the most productive ecosystems in the world, developing our wild oceans puts our food system at risk.

‘While it looks large on a chart, there is not a part of the Gulf of Maine that isn’t being regularly used by fishermen or for activities like aquaculture, shipping, and recreation. Those users currently share the space and have found a fragile balance. Any new development will test the delicate eco-system, take away from Maine communities, and give our natural resources to large international corporations,’ the Association states.

Its members argue that they are passionate about their way of life and sustaining it for future generations, and that means being stewards of the ocean’s natural resources.

‘They are understandably concerned about the impacts industrial development in the Gulf of Maine will have on the ocean environment and the species that inhabit it. Fishermen are also worried about being blamed for the future negative impacts that offshore development will cause on the environment and species.’

The Association states that while fishermen are often promised a seat at the table, rarely are their input and suggestions used in a meaningful way.

‘Experience shows us that too often and in very recent history, fishermen are only engaged after decisions have already been made. Equity and fairness are a goal of the Maine Climate Council Process, but already in its first project, equity, fairness, and inclusion have been overlooked,’ a spokesperson commented

‘It is hypocritical that Maine lobstermen (and soon fishermen from other fisheries) are being forced to dramatically reduce the number of lines in the water while offshore development companies carve out space to install massive cables, rope, chains, and anchors into the water column and ocean floor. It is unfair and unfathomable that they are not being held to the same standards for protecting species of concern.’

They also question the need to site power generation offshore, when inshore solar and terrestrial wind produce some of the cheapest energy available.

‘But Maine has chosen to invest in offshore technology which is some of the most expensive energy on the market. Maine’s ratepayers will be indebted to large international companies using the Gulf of Maine as a testing ground for mass-scale industrial technology. The Gulf of Maine should not be their laboratory.’