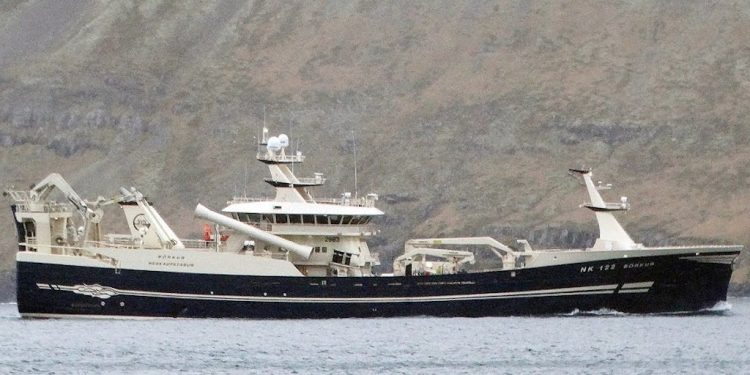 Mackerel in the far north

While Síldarvinnslan’s pelagic vessel Barði landed 1100 tonnes of mackerel in Neskaupstaður yesterday, the factory isn’t able to keep up – and company’s vessels are also landing overseas.

Barði was followed to Neskaupstaður by Bjarni Ólafsson with 1200 tonnes of mackerel, while Vilhelm Thorsteinsson landed this week in the Faroes and Börkur is heading to Norway with its catch.

Barði’s skipper Atli Rúnar Eysteinsson said that the catch is good quality, with 350-390 gramme mackerel with some feed in it.

‘This landing was nine hauls, five of ours and four of Bjarni Ólafsson’s were pumped into our tanks,’ he said, explaining that as the fishery moves further north and the steaming time continues to be stretched, they operate a pool system, taking it in turns to steam to Neskaupstaður with catches from several vessels to save time and to keep catches as fresh as possible.

‘We were fishing 450 nautical miles from Norðfjörður and the mackerel are still moving rapidly northwards. It takes us a day and a half to steam home and where the fishing is now is even further. Although it’s a long way to go, there’s fishing – unlike last year when there was nothing to be had,’ he said.

Börkur’s skipper Hálfdan Hálfdanarson said that they are steaming to land at the Brødrene Sperre factory near Ålesund, estimated to be a 32-33 hour steam.

‘The catch is 940 tonnes and this is good mackerel, around 400 grammes and not much feed. We took two hauls, 460 tonnes and then 370 tonnes, plus we had 100 tonnes of mackerel from Bjarni Ólafsson,’ he said.

‘Fishing was fine, with five to six-hour tows, plus the weather was unusually good. The fishing grounds are now a long way north. We finished up at 71°N, north of Norway and Jan Mayen, and west of the fishing area. We’ve never caught mackerel this far north before,’ Hálfdan Hálfdanarson said.