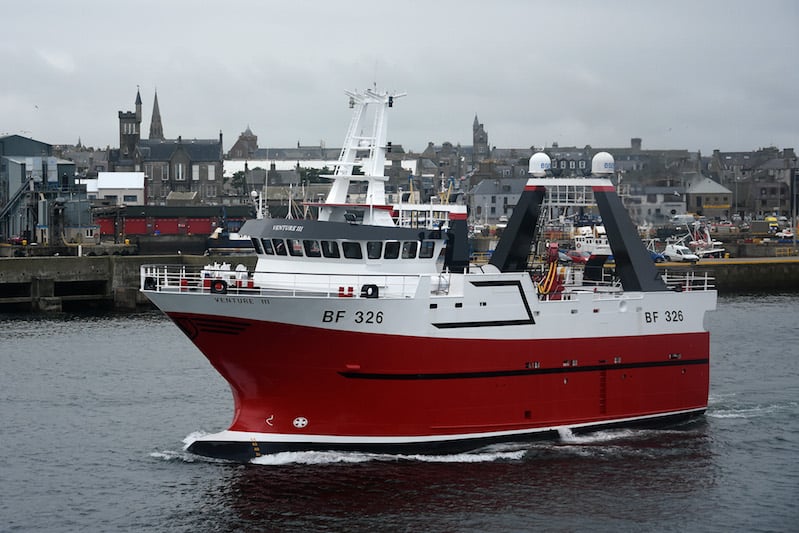 The new Venture III is a replacement for Mark Lovie’s previous vessel, Venture II, was built by the yard in 2001. Unlike the older trawler with its traditional Scottish layout with the cod end gilson forward on the starboard side, Venture III is designed with fishing activities focused at the transom with two stern ramps for bringing the catch on board and a large hopper immediately forward of these.

The design of the vessel was largely based on the successful Endeavour IV, which was also built by the yard for Mark’s brother Peter in 2009, but features some subtle alterations to suit the owner’s chosen arrangement and deck machinery package.

The most significant design difference between the two vessels is the rudder and trawl block arrangement. Mark Lovie was keen to retain the turning performance during towing of his previous vessel which had its trawl blocks located forward of the rudder and at the ships side, despite the fact the trawl blocks on the new vessel were to overhang the transom and be aft of the rudder.

Together with Mark, the yard design a system with a combination of a fixed nozzle and triple rudder which would produce high turning power and a movable trawl block arrangement which allows each block to be moved up to 1200mm longitudinally from there stern position, remotely controlled from the wheelhouse.

Design of the vessel was directed by Macduff Shipyards Limited working closely in conjunction with Macduff Ship Design who R03;produced the hull model, construction plans and carried out stability work.

The hull form is of round bilge with a large bulbous bow, flared stem, has the full beam carried right to the stern and has three separate decks. A ballast box keel is fitted along with deep V bilge keels to dampen transverse roll.

The hull fabrication was sub-contracted to the Finomar shipyard at Szczecin in Poland with the hull structure being designed, constructed and approved with DNV classification. On completion the hull was towed to Macduff where the outfit work began with the relevant areas being surveyed by SFIA and the MCA.

The main engine is an MAK 8M20 with a output of 1060kW at 900 rpm, arranged with plate cooling in the engine room, supplied by Finning UK and commissioned by Trevor McDonald (Marine Engine Services) Ltd.

The propeller is fitted within a high lift propeller nozzle and triple rudder system supplied by BT Marine.

The steering gear is a Scan Steering MT5000 complete with carrier bearing.

The Mekanord gearbox is fitted with three clutched PTO units for the hydraulic deck machinery and is also fitted with a standby lube oil pump. The control of the engine, gearbox and CP propeller is via a three station control system in the wheelhouse, supplied by Marine Engine Services Ltd.

A T700 bow thruster is supplied, driven off the deck machinery hydraulic pumps, by Hardy Engineering.

Also part of the package are a Toimil T-35000MT/3S discharge crane and an ALW580 Anchor/Mooring Winch. Other hydraulic equipment manufactured/supplied by the yard include two stern gates which can be lowered when shooting and hauling with rollers fitted on top, two flush hatches into the hopper and three rams connected to the trawl blocks for adjusting their longitudinal position.