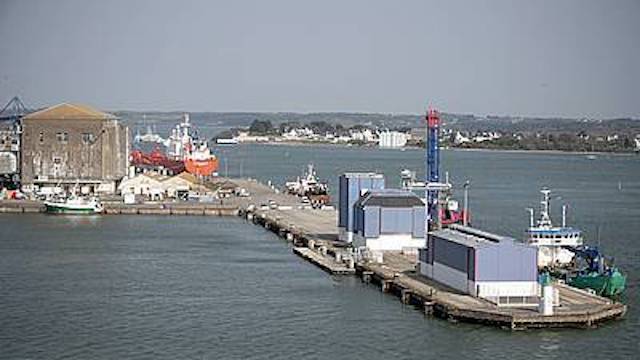 The new ice storage facility under construction on the Lorient quayside is expected to be completed by the end of the year, a much-needed doubling of production capacity as the supply can run low in mid-summer.

Summer is a busy time for Lorient, with pelagic landings of tuna, anchovies and sardines, and there’s a strong demand for the 200 tonnes per day of ice the port currently produces.

‘Some days we are reaching the limit of our capacity,’ said Sylvain Le Danvic at of Sem Lorient Keroman, the port’s management company.

To increase production capacity, a new ice storage facility is currently under construction among the port’s fish merchants.

‘We’ll go from 20 tonnes per day to 40 tonnes with a 2 tonne per hour production rate,’ he said.
Work is also progressing on upgrading the port’s other ice plant at Store 71, where the R404 system is being replaced with an ammonia (R717) system instead.

‘This means taking into account hazards specific to ammonia, and adapting the installations with ventilation and warning detectors – but this is absolutely not a pollutant,’ he said.

The new ice production is expected to be commissioned by the end of the year.

Work will also commence in September on the south tower, mainly with equipment upgrades.
Overall, the cost of the ice production upgrades is expected to run to €3.7 million, financed by Sem Lorient Keroman, with EMF support and with a loan from Banque Populaire Grand Ouest. This represents a substantial investment for the port, cutting the emissions of 980kg of greenhouse gases and 3665 tonnes of CO2.