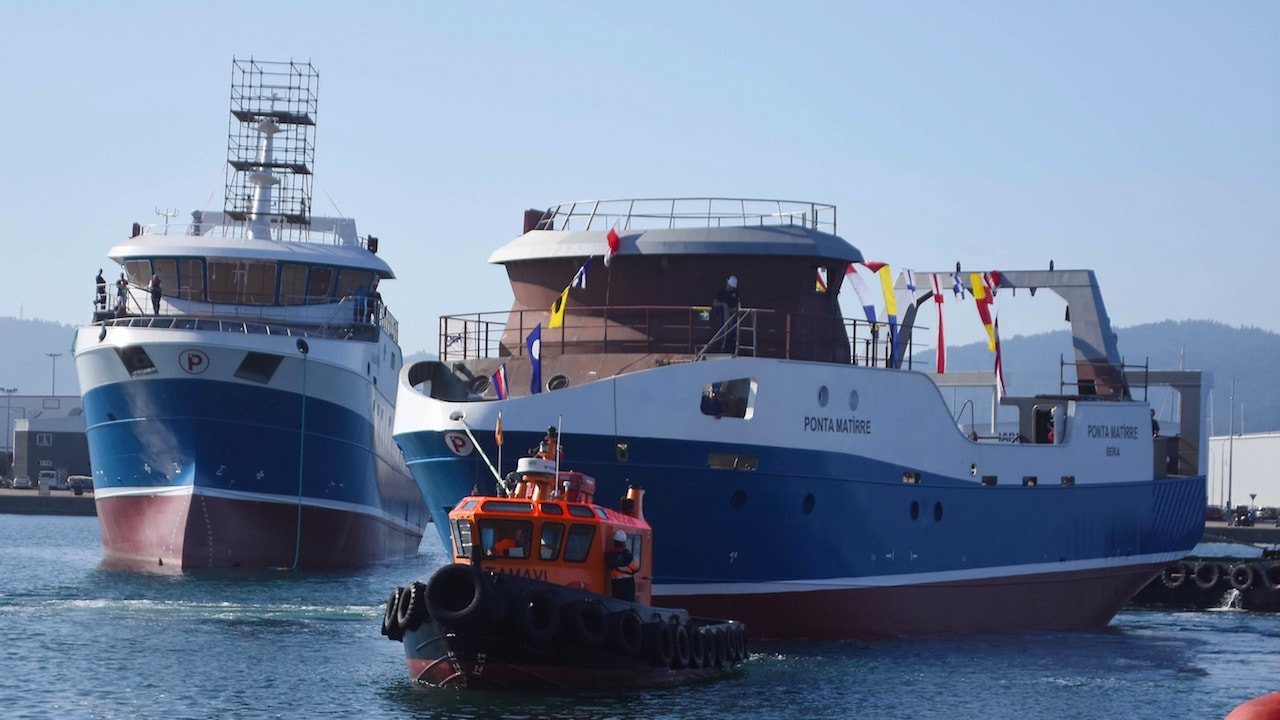 The first of the four freezers for Pescamar has been launched at Armon’s Vigo yard. Behind Ponta Matirre is Lalandii 1, being built to fish for hake in Namibia. Image: Nuevo Pescanova

Twenty years after it last took delivery of a new fishing vessel, the Nuevo Pescanova Group has seen the latest in a new series of fishing vessels go down the slipway at the Armon yard in Vigo.

The 30-metre Ponta Matirre is one of four new freezer trawlers for the company’s Pescamar subsidiary in Mozambique and will fish for shrimp. The new trawler’s name was chosen by the group’s skippers and refers to an area in the middle of the Sofala Bank, the fishing grounds where the Nueva Pescanova Group operates in Mozambique.
Ponta Matirre is the first of the four freezer trawlers to renew the company’s Mozambique fleet. Completion is expected to be by the end of this year. It will operate with a crew of 22.
This latest launch is part of an extensive programme of renewal by Nuevo Pescanova. In addition to the four freezer trawlers for Mozambique, the company is also building three 50 metre fresher trawlers that will operate on hake for the company’s Namibian subsidiaries Novanam and Lalandii.
The delivery of the first of the vessels for Namibia, Lalandii 1, is scheduled to take place by the end of this month.
As the company puts an overall €42.50 million into its fleet renewal, all seven vessels for Nuevo Pescanova are being built by Astilleros Armon at its Burela and Vigo shipyards.
All of these vessels are designed for efficient and economic operation, with top quality processing facilities and with the focus on working and living conditions for the crew.

From Vietnam to Canada: Atlantic Titan in first trip