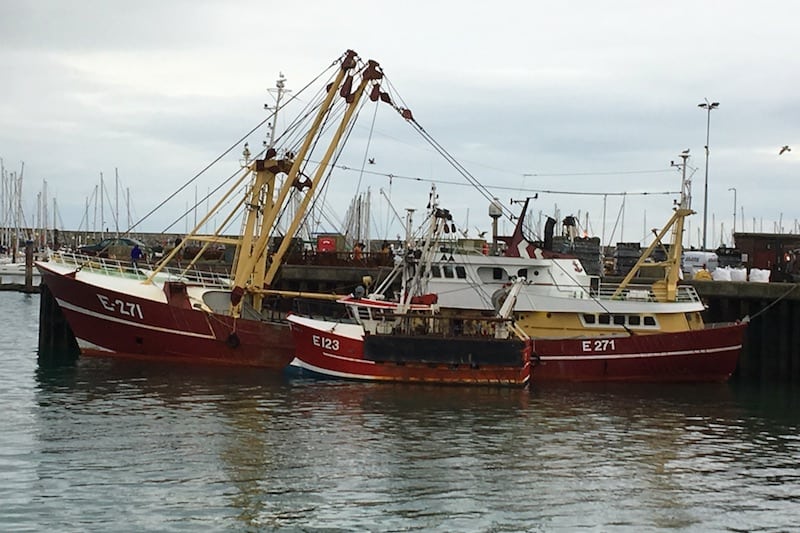 South-West fishing company Waterdance has made an addition to its fleet, and the beam trawler joining the Brixham fleet takes its name after parent company Greendale’s much-missed and respected administrator Julie Jones who passed away last year after many years with the company, during which time she saw it grow significantly.

Following a serious fire on board ten years ago, the trawler was extensively refitted, with its accommodation and wheelhouse replaced.

‘This is a very exciting development for the Waterdance fleet. What we are getting is a beamer with a 1983 hull in excellent condition, and with superstructure that’s ten years old,’ said Waterdance managing director Nigel Blazeby as Julie of Ladram docked in Brixham for the first time, where it becomes the Devon port’s largest fishing vessel.

He added that Julie of Ladram has been UK registered in the past as Quo Vadis BCK-43, but has most recently been operating as a pulse beamer under the German flag for its Dutch owners as Jacob Grietje.

‘All the pulse gear has been removed and she will be fishing from Brixham with traditional large beam trawl gear – with Steve Rogers sailing as skipper,’ he said.

Steve has a background in working on bigger boats until he built his own <15 metre scalloper, Lady L, which was later sold as he decided to go in new directions.

‘I was able to take my Class I Officer of the Watch Unlimited certificate, supported by the William Slater Fund and the Marine Society, and then spent three years with the Maritime and Coastguard Agency as a surveyor, which was a brilliant job,’ he said.

‘It was great meeting fishermen from all round the country, all the characters, but then Waterdance came along with the opportunity to take this big one.’

‘The MCA needs to have professional seafarers on its staff and they have benefitted from Steve’s skills and experience as a surveyor – and now Waterdance benefits from his skills as a skipper,’ Nigel Blazeby said.

‘A flow of skills and experience between the MCA and the industry can only be a healthy situation and this kind of crossover of expertise is a great benefit to both.’

Julie of Ladram is currently in Brixham where its registration and survey are being carried out, and Steve Rogers expects to be able to start fishing at the end of this month, to land traditional groundfish species to Brixham.

‘Julie of Ladram is a bit longer than the boats I’m used to, but the principles are the same as any other beam trawler I’ve worked on. The capacity is much the same, but with a boat this size we should have a bit more comfort,’ Steve said, commenting that Julie of Ladram has been well maintained, is in generally excellent condition and the nine-cylinder Stork-Wärtsilä main engine was overhauled and rebuilt in 2016.

‘She shows her age in places, but the heart of the ship is what’s important.’ he said.

Julie of Ladram will be working seven-day trips, with the crew rotating two trips at sea to one ashore.

‘We’re sailing six-handed to comply with the new ILO regulations, which stipulate hours of work and rest, Steve Rogers said.

The sale of the former Jacob Grietje ST-27 to Waterdance from Dutch owners Jacob BV was brokered by Hoekman Maritiem.

The Waterdance fleet currently comprises eleven beam trawlers, five netters, four potting vessels and a scalloper, with its two newbuilds taking shape at the Luyt shipyard in Holland. 15 metre potting vessel Nichola of Ladram is expected to be delivered in the near future, while 35 metre beam trawler Georgina of Ladram is scheduled for completion early next year.